Dunmore Cave is eleven kilometres north of Kilkenny City and, like other caves across the country, is formed by limestone which was laid down over 300 million years ago. 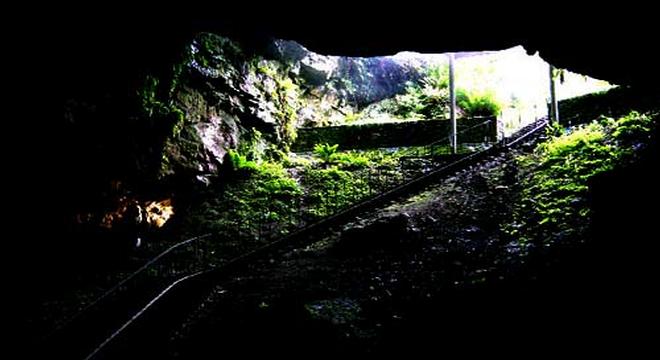 Dunmore Cave is eleven kilometres north of Kilkenny City and, like other caves across the country, is formed by limestone which was laid down over 300 million years ago. It contains almost a quarter of a mile of passages and at its deepest point is 150 foot below the surface. Although this is smaller than many of the caves around the country, the beauty and magic of its calcite formations as well as its scientific and historical interest make it one of Ireland's most fascinating caves. Its presence has been known for years but it is only recently that attempts have been made to unravel its history. In 928, the Dunmore Cave was the site of a Viking massacre. Mention of the cave was made in the 9th century Irish Triads.

Since 1940, when the cave became property of the State, it has been a National Monument because of its historic interest. Today, stairs and walkways and an extensive lighting system have been installed to aid access and viewing. There is restricted plant and animal life in and around the cave primarily due to the lack of sunlight. The cave did at one time support a bat colony and bat skeletons can be seen encrusted in the calcite limestone.

History and geology blend at Dunmore Cave to give an interesting and unique situation. Consisting of a series of chambers formed over millions of years, the cave contains some of the finest calcite formations found in any Irish cave. Exhibitions and displays in the Visitor Centre. The cave is inaccessible for wheelchair users.