The Hook Lighthouse is situated at the tip of the Hook Peninsula in County Wexford, in Ireland. 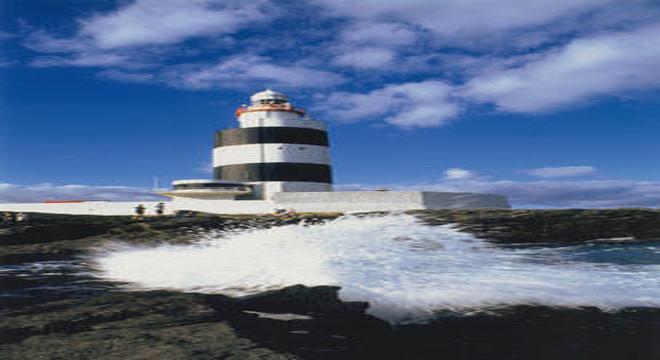 Southwest Wexford in the south east of Ireland is “the secret Ireland” - unspoilt and awaiting to be discovered. It is distinctly different from the rest of the country, and possesses a landscape, history, culture and character of its own. Its uniqueness is due in no small part to some early visitors from across the seas: the Celts, Vikings, Normans & Templars who came, conquered and liked the place so much that they stayed!

Without doubt one of the main attractions in the southeast of Ireland is the medieval Hook Lighthouse on the Hook Peninsula in Co. Wexford. The present structure is about 800 years old and is the oldest intact operational Lighthouse in the world. Lighthouses have a magic and mysticism of their own, none more so than the 13th Century Hook Lighthouse. Relax by the sea and keep an eye out for seals, dolphins and even whales. In clear weather you can see for miles and in a storm the spray often reaches the top of the lighthouse!

Hook Lighthouse offers guided tours of the lighthouse tower, a 13th Century Norman structure, built by William Marshal, Earl of Pembroke as part of the development of his Lordship of Leinster. Climb the 115 steps to the spectacular view from the balcony. On your climb to the top your tour guide will bring you through a series of chambers, introducing you to the fascinating story of Hook Lighthouse. With the exception of the lantern it remains today largely as it was eight centuries ago.

Other events advertised during the year include our main festival held on the May bank holiday weekend "Maritime Matters" celebrating all things nautical, Tall ships which will be leaving from the Hook on July 3rd, our very spooky Halloween "Ghostly Guided Tours" and "Lighthouse Sessions" an evening of live music inside the Lighthouse which are held throughout the year and on request.

This year and next year for a coach groups we are charging €3.00 per person for a guided tour of the Lighthouse

Hook Head Lighthouse is situated on the R734, 50 km from Wexford, 29 km from Waterford via the Passage East Car Ferry and 38km from New Ross.

Visitor centre open year round but closed for one week up to and including 25 December.