Striking an imposing figure along the banks of the River Shannon and dominating the town of Limerick, this 12th Century castle was built by King John of England and stands as a testament to 800 years of history. 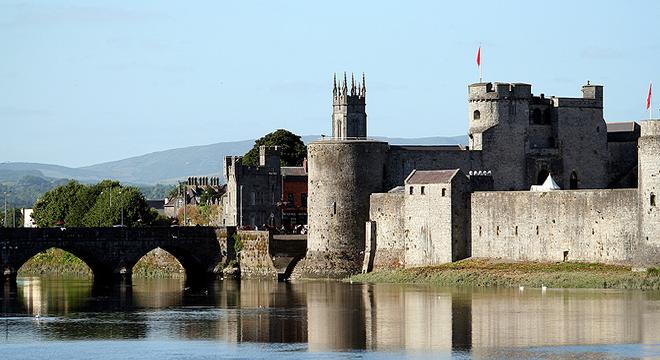 Striking an imposing figure along the banks of the River Shannon and dominating the town of Limerick, this 12th Century castle was built by King John of England and stands as a testament to 800 years of history . A magnificent sight of solid curtain walls, bold drum towers and a strong turreted gateway, King John's Castle was built between 1200 and 1210 during the first Norman conquest of Ireland, as a base from which to subdue the Gaelic Chieftains of the West. For centuries the castle dominated the area as Limerick continued to grow as a trade centre throughout the Middle Ages. During the Williamite Wars of the 17th Century, Limerick and King John's Castle served as a stronghold for Jacobite forces supporting king James II of England and played a lead role in the Siege of Limerick in 1691.

Following the truce the Treaty of Limerick was signed on the Treaty Stone, which stands on the opposite riverbank. Inside the castle are a number of exhibitions documenting the history of the castle, of Limerick and of the personal life of the hugely unpopular King John. There is also an archaeological site to explore with excavated findings from 1900/01 illustrating how the site of the castle was previously a Viking village. The area around the castle, known as King's Island is the oldest part of Limerick, its network of narrow, winding streets and alleyways are consistent with its medieval town planning. This area of Limerick known as Englishtown was originally walled and served as the administrative centre of the town in earlier times. Leaflets on walking tours are available at King John's Castle.