Situated eight kilometres east of the village of Slane, the Passage Grave of Newgrange is regarded by some as one of the greatest wonders of the ancient world. 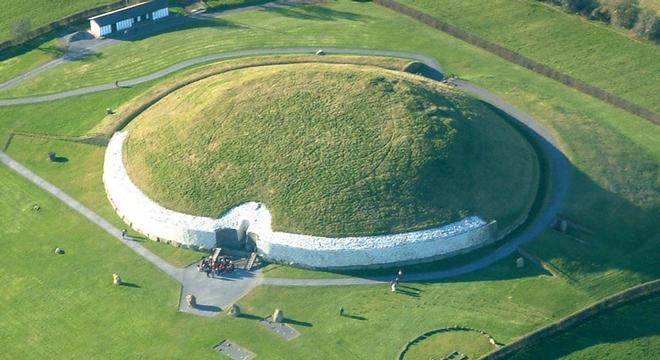 Situated eight kilometres east of the village of Slane, the Passage Grave of Newgrange is regarded by some as one of the greatest wonders of the ancient world.

As well as the less famous Knowth and Dowth, Newgrange boasts the fact that it is older than Stonehenge and the Pyramids of Egypt, having survived over five thousand years. Almost ninety metres in diameter and eleven metres in height and covering an area of almost one acre, the main burial mound of Newgrange is surrounded by the remains of three smaller passage graves. It is situated on a low hill and commands breathtaking views of the Boyne Valley. The passage only extends for a quarter of the total diameter of the mound. It opens out into a central chamber with three adjoining smaller chambers to the west, east and north.

One of the main reasons for the importance and fame of Newgrange is its richness in megalithic art which can be seen all over the chamber especially on the east recess. The most remarkable feature of Newgrange, however, is the roof-box over the entrance which, at first glance, seems insignificant. However, its precise alignment and location reveals the incredible depths of knowledge which this ancient civilization possessed. It measures 90cm by 1m and is perfectly aligned to catch the first rays of the rising sun on the morning of the winter solstice on the 21st of December. On that morning the rays of the sun pass through the roof-box, make their way down the passage-way and light up the central chamber for about fifteen minutes after which the passage and chamber are once again engulfed in darkness.

Acess only over the Bru na Boinne Visitor Centre