O'Connell Street is the main street of the city. Previous known as Sackville St., it features in many of the historic events which took place in Dublin. 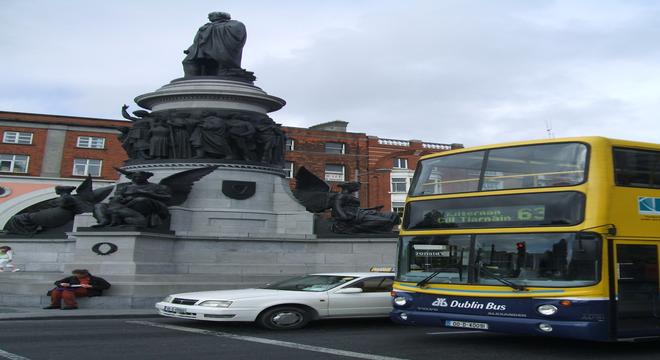 O'Connell Street is the main street of the city. Previous known as Sackville St., it features in many of the historic events which took place in Dublin.

It was the construction of a bridge over the river Liffey that made the street important over other streets in the area. The first bridge, the Carlisle Bridge, was built in 1794. It was replaced in 1880 by the present, much wider, O'Connell Bridge. The street was known as Sackville St. up until 1924 when it was renamed O'Connell St. after Daniel O'Connell, the great nationalist leader of the early 19th century.

The G.P.O. is the building which dominates the centre of the street. It was from the steps of this building that Padraig Pearse read the Proclamation of Independence in 1916 and the building was the main centre of the revolt. Consequently, the inside was very badly damaged. It had only just recovered when the Civil War broke out and the street was the venue for another battle. Much of the eastern side of the building was completely destroyed by a fire. Bullet marks can still be seen on the walls of the building from that turbulent period.

The street contains three statues. At the northern end of the street is a statue of Charles Stewart Parnell, known as the uncrowned King of Ireland. The statue at the southern end is a statue of Daniel O'Connell, who successfully and peacefully led the movement to achieve Catholic Emancipation. Half way between these two you have the fountain figure, Anna Livia, nicknamed the "floozy in the jacuzzi."

Today O'Connell Street has everything from fast-food joints to expensive restaurants and from small boutiques to big department stores.