A multimedia interpretive centre, the Skibbereen Heritage Centre houses the Great Famine Commemoration Exhibition outlining one of the most tragic periods of Irish History in a part of Ireland that was one of the worst effected. 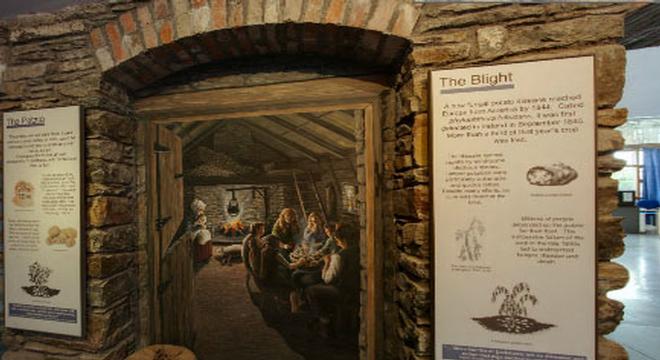 A multimedia interpretive centre, the Skibbereen Heritage Centre houses the Great Famine Commemoration Exhibition outlining one of the most tragic periods of Irish History in a part of Ireland that was one of the worst effected.

The Great Famine of the 1840s was one of the worst human disasters of the 19th Century. As the potato crops of Ireland were blighted in 1841 and more severely in 1848, a nation whose people were already on the brink of poverty, were now on the brink of disaster. In 1841 the population of Ireland was 8.5 million, by 1850 over a million had died of hunger and more emigrated to escape, even today the population of Ireland is under 5 million. In the parish of Skibbereen the Great Hunger claimed the lives of 1 in 3 people with around 10,000 poor souls buried in a mass grave at nearby Abbeystrewery. Skibbereen became synonymous with the suffering of the Potato Famine and a focal point for journalists and politicians of the day campaigning for relief for the poor.

Today the Heritage Centre recounts the events of the Great Famine through audio-visual dramatisations using primary sources of the day and includes an introduction from actor Jeremy Irons. The centre also organises historical walks of Skibbereen and is home to the Lough Hyne Visitor Centre with informative exhibitions on Ireland's first Marine Nature reserve and uniquely beautiful salt-water lake, which is located nearby.

For more information on our Ireland vacations or chauffeur vacations Ireland call on us now.