Erected on the site of the second Linen Hall which was gifted to the Anglican church by the fifth Earl of Donegal and named after both his wife and St Anne, the mother of the virgin Mary. 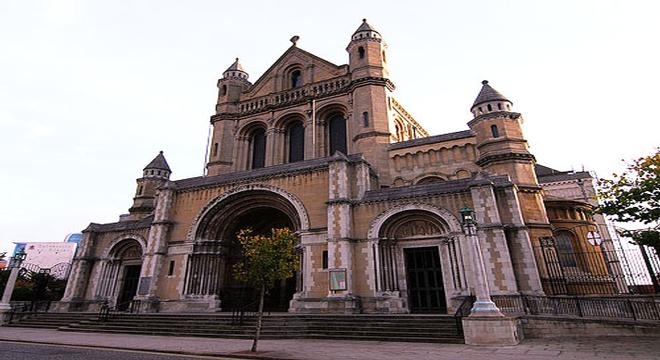 Belfast Cathedral stands on the site of the Parish Church of St Anne. There has been worship on the site since 1776.

Erected on the site of the second Linen Hall which was gifted to the Anglican church by the fifth Earl of Donegal and named after both his wife and St Anne, the mother of the virgin Mary.

St. Annes Church was the main place of worship for Belfast Anglicans for over 100 years until after the royal charter which made Belfast a city in 1888 and it was felt a new cathedral capable of holding 3-4000 people was required. (The current building capable of holding 1000 is much more realistic and practical) and which reflected the grand view of Belfast and its citizens of the time.

The foundation stone for the cathedral was set in 1899 and building commenced around the existing church which was only demolished in 1903, one year before the consecration of the new nave in June 1904.

The Cathedral has been developing in stages throught the 20th Centuary with the new front and Baptistry added in the 1920's and the North and south Transepts added in the 1970's and 80's respectively. The new futuristic spire was added in 2007 and is still a talking point among Belfast locals.

The Black Santa tradition began in 1976 when Dean Sammy Crooks began sitting outside the cathedral over the Christmas period collecting money for charity. Dressed in his black cape he became known as the Black Santa. Successive Deans have kept the tradition with Dean Crooks being succeeded by Dean Jack Shearer and currfent Dean Houstan McKelvey. Over the years Black Santa has collected around BP3 million.