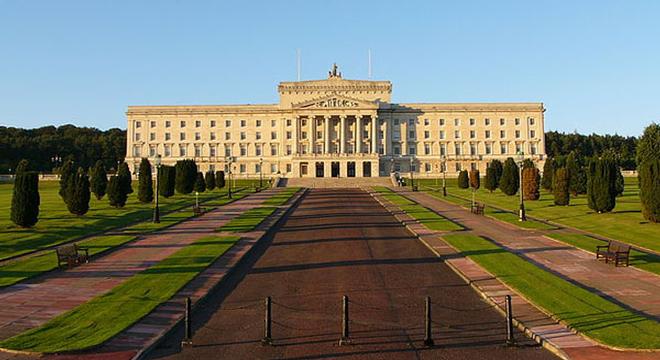 The site of the new parliament buildings to the East of Belfast was obtained in 1922. Originally the plans for the building were a replica of the US Capitol building in Washington and would have been much larger and grander than the present building, however these plans were scrapped in 1929 (post Wall Street crash and subsequent austerity) in favour of the current Greek classical building designed by Sir Arthur Thornley which was completed and opened by Edward Price of Wales (later King Edward the VIII and Duke of Windsor) on November 16 1932.

The building has two chambers originally for the house of commons of Northern Ireland and the Northern Ireland senate, in effect a devolved version of the upper and lower houses of the UK parliament and of course the U.S. Senate and House of Representatives.

In the main hallway of the building hangs a chandelier which was a gift from King George the V which as a gift from Kaiser Wilhelm II had hung in Windsor castle until the beginning of WW1 (perhaps considered inappropriate for royal residences after the war.

The statue in the driveway is that of Edward Carson, the founder of Ulster Unionism and architect of the Northern Ireland state, this was erected in 1932 and unveiled by Lord Carson himself.

Stormont is presently used by the Northern Ireland Assembly which meets in the Commons chamber. The Senate chamber is now used as a committee room by the assembly.