The rugged Beara Peninsula is shared between counties Cork and Kerry. It is completely encircled by the Beara Way, which offers a combination of mountain and coastal scenery.... 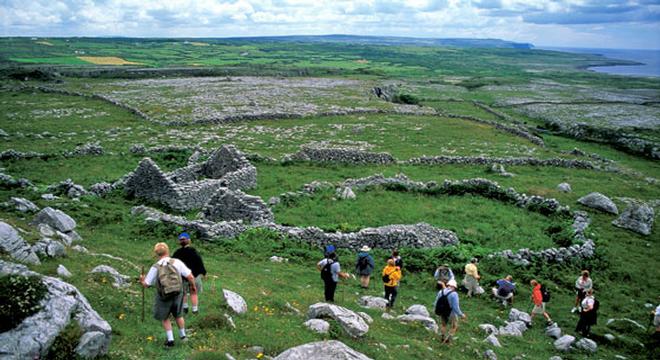 The rugged Beara Peninsula is shared between counties Cork and Kerry. It is completely encircled by the Beara Way, which offers a combination of mountain and coastal scenery. The route uses minor roads, tracks and paths, passing a number of small towns and delightful villages, with history and heritage often to the fore.
The Beara Way features a number of spur routes, as well as optional circuits of Bere Island and Dursey Island. If only the main circuit was covered, the Beara Way could be walked in just over 60 miles. Accommodation is available, but walkers should check availability with local Tourist Information Offices.

Day 1
Starting from Glengarriff at the head of Glengarriff Harbour, the Beara Way follows roads and old tracks alongside the Magannagan Stream. An ascent crosses a rugged gap between Gowlbeg Mountain and Sugarloaf Mountain. An old coach road, now no more than a track and minor road, runs down to the little village of Adrigole, at the head of Adrigole Harbour. A prominent standing stone and an old church are passed on the way.

Day 2
The Beara Way leaves Adrigole along the main road, then climbs higher to avoid the traffic and cuts across the rugged lower slopes of Hungry Hill. A series of bog roads, minor roads and farm access tracks are linked to form a zig-zagging route across the slopes of Maulin. The Beara Way later drops down onto the main road to enter Castletownbere. This town has a full range of services and there are route options to consider before leaving. 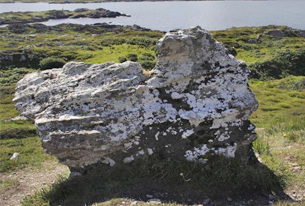 Day 3
A small car ferry links Castletownbere with Bere Island, where a waymarked circuit offers a fine day's walk around this island. The island was an important military installation for the British army in times past.

Day 4
Alternatively, there is a shorter spur route from Castletownbere to Dunboy Castle. The castle was once the scat of the O'Sullivan Bere, who was forced to flee with his followers on a bitter winter march during 1602- 1603. Walkers who visit the castle return the same way to Castletownbere afterwards.

Day 5
The main circuit continues from the town. Roads and tracks run above Castletownbere, passing a stone circle, ring fort and wedge grave before crossing a gap in the mountains. There is a descent towards the colourful village of Allihies, which is surrounded by the remains of a copper-mining industry.

Day 5
The main circuit continues from the town. Roads and tracks run above Castletownbere, passing a stone circle, ring fort and wedge grave before crossing a gap in the mountains. There is a descent towards the colourful village of Allihies, which is surrounded by the remains of a copper-mining industry.

Day 6
Again, there is a lengthy spur route to consider, taking walkers along the rugged cliffs to the end of the Beara Peninsula to reach Dursey Sound. A cable-car is available for those who wish to proceed onto Dursey Island, where a short waymarked circular walk allows for a full exploration.

Day 7
Walkers venturing out to Dursey Island need to make their way back to Allihies afterwards to continue with the main circuit of the Beara Way.

Day 8
A mining track climbs uphill from Allihies and passes old copper mines as it crosses a rugged gap in the Slieve Miskish Mountains. A gradual descent eventually links with roads, which lead through the lovely little village of Eyeries. A coastal walk around Coulagh Bay includes sight of the rock known as the Hag of Beara. There is access to a low, but rugged ridge where views in clear weather can be extensive. A gradual descent from the ridge is followed by a road walk through the delightful village of Ardgroom.

Day 9
After leaving Ardgroom by road, there is an ascent along a boggy old track which crosses a gap in the mountains before descending towards Lauragh. After turning around the lush, wooded bay at Lauragh, the Beara Way follows an old road between the prominent hills of Knockatee and Knockanoughanish. A descent leads towards Tuosist, but the course of the Beara Way stays above the tiny village.

Day 10
After crossing a hillside above Tuosist, the route passes between the Cloonee Loughs and Lough Inchiquin. The Beara Way runs up a road and continues across the rugged crest of a mountain before dropping down towards Dromaghty Lake. Minor roads are linked to take the Beara Way towards Kenmare, although there is an alternative route along a patchy old road which runs over a gap to reach Bonane by a more direct line. Walkers who enter the busy town of Kenmare can avail of a full range of services, but it is necessary to retrace steps across the bridge to continue the walk.

Day 11
The main road which runs from Kenmare to Glengarriff is avoided as much as possible by the Beara Way. The route has been taken along quiet roads on a parallel course to reach Bonane. From that point, the roads gradually deteriorate and a rough track is used to cross over the crest of the mountains. This clear track, which was once the main highway, then drops down onto the main road, which is followed almost all the way down to Glengarriff to close the circuit around the Beara Way.

Click here to begin planning your trip to Ireland and to talk to one of our Ireland Vacations Specialist about walking tours and how to accommodate a walking excursion into your vacation or honeymoon.