The most westerly peninsula in Europe and one of Ireland's most atmospheric places, the Dingle Peninsula boasts beautiful scenery, rugged charm and a true sense of timelessness. 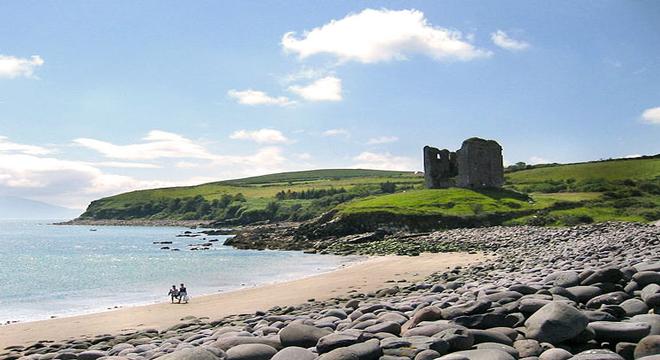 The most westerly peninsula in Europe and one of Ireland's most atmospheric places, the Dingle Peninsula boasts beautiful scenery, rugged charm and a true sense of timelessness.

The Dingle Peninsula holds a special place in the Irish consciousness, a place reminiscent of a past age, steeped in the lore of the land with many old and ancient sites. Stretching some 48km westward from Tralee, Dingle Peninsula has a wealth of emotive scenery from sweeping mountains to curving sandy bays, lonely stones to deserted islands.

The town of Dingle is the main town located on the southern side of the peninsula. An attractive port nestled in a natural bay; Dingle is a good base for exploring the peninsula, a characterful town that thrives as much on fishing as it does tourism. Dingle Bay famously has a resident dolphin named Fungie, who since his first appearance in 1984 has had a whole tourist industry created around him, with boat trips and merchandise.

On the road east of Dingle is the long sandy stretch at Inch where the archetypal Irish movies, Ryan's Daughter and the Playboy of the Western World were filmed. This 6km long beach has more recently become popular with surfers.

At the most westerly point around Slea Head is a Gaeltacht area where the Irish language is still widely spoken. Along with the language, the old customs and lore are alive and well in villages such as Ventry, Ballyferriter and Dunquin. Here are also the famous Blasket Islands, deserted in the 1950s but produced some of the most prominent writers in the Irish language. Boat trips can be arranged through the Blasket Islands Visitor and Interpretation Centre in Dunquin. In this part of Dingle there are a great many antiquities from the Fahan beehive huts to the Gallarus Oratory one of the best preserved early Christian Churches in Ireland dating back some 1200 years.

In the north of Dingle is Ireland's second biggest mountain Mount Brandon a climb of 3116m with stunning views back across the peninsula. In the shadows of the mountain is Brandon Creek where it is believed St Brendan the Navigator set sail and discovered North America in the 6th Century. On the other side of Brandon is the Connor Pass at 456m the highest road in Ireland with spectacular views of Dingle town and Mount Brandon.

There is plenty to do in Dingle Peninsula, from a range of equestrian activities, all kinds of angling, golfing at Ballyferriter, hill walking or just soaking up that Dingle atmosphere.

For more information call us today. Whether it be advice on the best Ireland vacations or information regarding Ireland Honeymoons, we can help!