The Giant's Causeway is Northern Ireland's most famous landmark and a World Heritage Site. It takes its name from the legends of Finn MacCool and is draws people from far and wide to this corner of north Antrim. 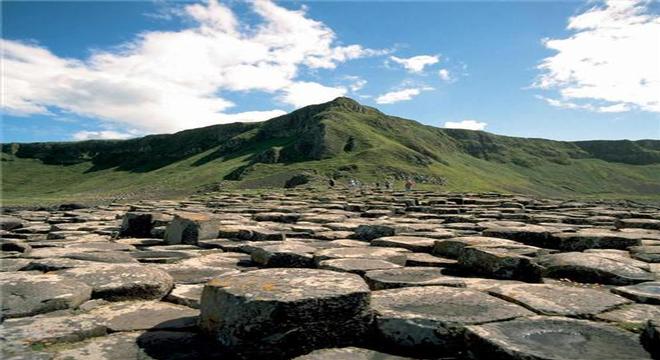 The Giant's Causeway is Northern Ireland's most famous landmark and has been an official Unesco World Heritage Site since 1986. Formed between 50 and 60 million years ago, the 'causeway' takes its name from the legends of Finn MacCool and draws people from far and wide to this corner of north Antrim. Whether you are just researching about Ireland or planning an Ireland vacation, The Giants Causeway is a must see!

The north Antrim coastline in renowned for its scenic beauty and the Giant's Causeway is its unique jewel in the crown, known to the Irish as the 8th Wonder of the World. A jagged promontory of neatly packed columns of hexagonal basalt rocks created some 6 million years ago by a flow of basaltic lava. As the lava cooled it formed these distinctive hexagonal shapes just as the bottom of a dried riverbed would crack into shapes.

It is easy to see how these almost perfectly symmetrical formations would be viewed as otherworldly by our earlier ancestors and how the Giant's Causeway would give rise to colourful legend. The story goes that mythical Irish giant Finn MacCool built the causeway to get to Scotland and battle with a rival giant called Benandonner. When he got there he found that the Scottish giant was asleep but also far bigger than himself, so Finn returned back across the causeway. When Benandonner woke up he came across the causeway intent on fighting Finn. Finn's wife dressed up her husband as a baby and when Benandonner arrived she said Finn wasn't home and to be quiet not to wake up the baby. When Benandonner saw the baby he decided that if the baby was that big, Finn must be massive. So he turned tail and fled back across the causeway ripping it up as he went. All that remains are the ends, here at the Giant's Causeway and on the island of Staffa in Scotland where similar formations are found. In 1986 a Visitor centre was opened at the Giant's Causeway to coincide with the addition by Unesco's world heritage centre to its coveted list of world heritage sites, this was unfortunately damaged some years later in 2000 by a fire but a new state of the art educational visitor centre was built,which opened in July 2012. The new visitor centre has information and details of the many walks that tourists can take to the famous stones and along the cliff tops, and this new facility combines an interpretive centre with explanations of how the Causeway’s 40,000 basalt stones were formed, as well as stories about the areas myths, history, geology, flora and fauna.

A Wonder of the world?

In the past the causeway became widely known as the "eighth wonder of the world" when large numbers of visitors came to view it from the 1700's. Perhaps now there is a chance it could be officially recognised as such: In 2008 the Giant's Causeway was nominated for the accolade of one of the world's seven natural wonders. The new seven wonders of the world were announced in Lisbon, Portugal in July 2007 and the "new seven wonders of Nature" as they are officially called were launched.

Our vacations to Ireland can be tailored to suit you. We also have a range of Ireland Honeymoon packages from romantic to adventure holidays. Group Tours to Ireland and Ireland chauffeur tours are our speciality - please contact us today for more details.

No admission fees for National Trust members, however, please note pre-booking is recommended for all visitors.