After crossing a rugged little hill above Fahane, the route descends to Glanlough. After circling around the lough, walkers are led up a rugged ridge and cross over Gouladane... 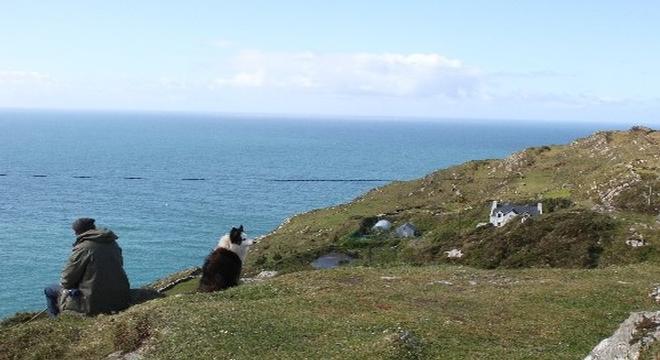 The Sheep's Head Way is one of the most recently created waymarked walks in Ireland. It was officially opened by President Mary Robinson and has become an instant success. The route combines low, rugged hills and a splendid cliff coastline with quieter roads, paths and tracks to make a complete circuit around the Sheep's Head Peninsula. As the route is fairly short and covers relatively easy terrain, the Sheep's Head Way is eminently suitable for those walkers who do not have much experience of covering long distances. Accommodation is available at various points along the route.

The Sheep's Head Way has its own logo, showing two sheep locking horns. This was taken from a carved stone which is passed near Bantry by walkers following the route. The stone is also notable for showing the earliest surviving representation in stone carving of a boat in Ireland. One of the features of the Sheep's Head Way is that the waymarking has been accomplished using oak posts and stone markers, in keeping with the natural surroundings of the peninsula.

Day 1
Bantry is the main town in the area. It is an historic town with a full range of facilities at the head of Bantry Bay. Walkers leave the centre of town and pass quickly into the peaceful grounds surrounding Bantry House. Nearby is the 1796 French Armada Centre. After crossing a main road outside the Westlodge Hotel, quiet roads are followed onwards. A path leads past Lady's Well, then, later there is a narrow, zigzag road running steeply uphill at Boolteenagh. At the top of this road, the Sheep's Head Way follows the crest of the low range of hills which stretch along the length of the Sheep's Head Peninsula. The route crosses the summit of Barna Mhor and passes close to Loch na Fuilla, which is couched in a little hollow.

After crossing a rugged little hill above Fahane, the route descends to Glanlough. After circling around the lough, walkers are led up a rugged ridge and cross over Gouladane. Seefin lies directly ahead, but the Sheep's Head Way descends along an old zigzag track to Gortnakilly and takes to the road. The road running uphill is known as the Goat's Path Road, and it is crowned with a Marian Year statue and the recently erected Finn McCool's Seat. The inscription on the seat reads "water and ground in their extremity", which sums up the Sheep's Head Way experience. 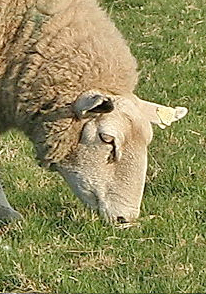 Day 2
The Horse Shoe Road is followed for a while, then the route runs past the deserted village of Crimea. Beyond the ruins is an abandoned copper mine which was worked from the sea. A rope has been fixed beside the narrow cliff path as a safety measure, but walkers are still advised to avoid the area in high winds. There is an alternative inland route by road to Gortavillig. The route continues towards the very end of the Sheep's Head, passing along the tops of the cliffs and enjoying remarkable coastal views. There is a lighthouse at the end of the point, where the route is forced to make a complete turn before heading for the road-end at Tooreen. There may sometimes be refreshments at this point. The Sheep's Head Way leaves the road and climbs over a hill crowned with a ruined signal tower. A descent along an old track leads back onto the road. Paths, tracks and minor roads lead gradually downhill and lead walkers through more cultivated countryside to reach the little village of Kilcrohane.

Day 3
The route leaves Kilcrohane and heads for the shore, crossing large stepping stones near a small lake. The site of an ancient Bardic School and the Poet's Well are passed. There is an inland stretch which crosses a rough tract of countryside around Rossnacaheragh. The route climbs uphill and follows a length of quiet road, then drops down through fields and eventually passes the substantial ruins of the Old Court. The route regains the coastal road and runs into the village of Durrus.

Day 4
There is a good range of services at this point for the weary walker, as well as a book where comments about the Sheep's Head Way can be recorded. The road is followed away from Durrus, then there is a gradual ascent through a forested area, emerging briefly on a main road at Barnagechy. A rough track and a quiet minor road run through high, rolling, cultivated countryside. The road crosses Vaughan's Pass and enjoys fine views across Bantry Bay, before dropping down towards Bantry. The route again wanders through the lushly vegetated grounds of Bantry House before leading into the centre of town and bringing the Sheep's Head Way circuit to a close.