The Ulster American Folk Park is a fascinating open-air museum reconstructing the story mass emigration from Ulster to North America in the 18th and 19th Centuries and tracing the roots of those who left for the New World. 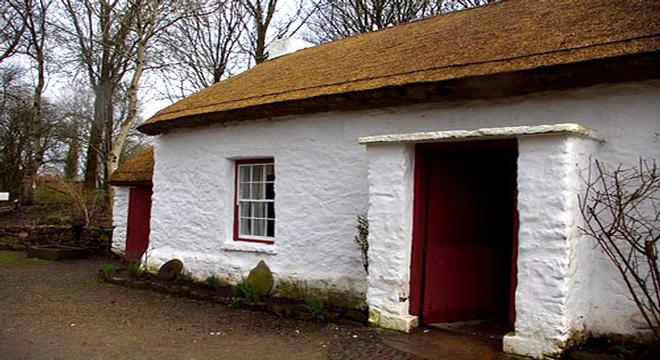 The Ulster American Folk Park is a fascinating open-air museum reconstructing the story mass emigration from Ulster to North America in the 18th and 19th Centuries and tracing the roots of those who left for the New World.

The Ulster American Folk Park is one of Ireland's best museums outlining the lives of those 2 million people who left Ulster to conquer the American frontier between the 17th and 19th Centuries. These people of Ulster, commonly known as Scotch Irish established themselves in all strata of American society. Several of the signatories of the American Declaration of Independence were Ulstermen, and a number of America's first Presidents were descended from Ulster.

The Folk Park provides a living history experience with historic buildings transported from all over Ulster, expertly reconstructed and authentically furnished, while demonstrators in period costumes go about their everyday tasks, illustrating what life was like in Ulster centuries ago. There are around 30 exhibits in total, recreating the old world of Ulster and the new world of the US in the 18th and 19th Centuries from rustic Weaver's Cottages, homesteads and a typical Ulster Street to a Pennsylvania Log House brought from Greene County and an American Street based on 19th Century Boston with a replica First Mellon Bank.

Linking the two worlds is the excellent Ship and Dockside Gallery, using reconstructed buildings from Derry and Belfast and the Brig Union a replica of an early 19th century sailing ship, which would transport emigrants to new lives across the Atlantic.