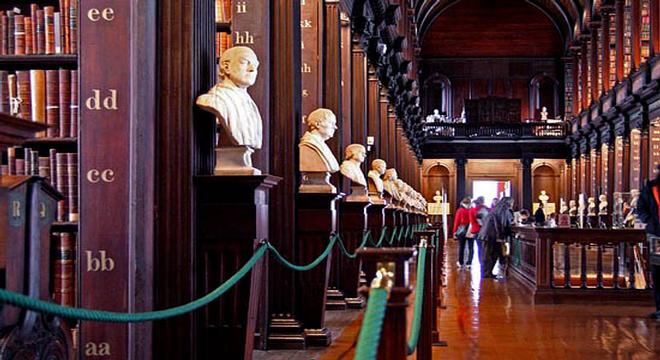 It was founded by Elizabeth I in 1592 in an attempt to stop students going to the continent and getting revolutionary ideas or being influenced by the Pope in Rome. For centuries the college was the centre of Protestant religion and Catholics couldn't join unless they accepted the Protestant faith. Catholics also had to get special permission from the bishop to attend the college or else face the possibility of excommunication. These restrictions were not completely lifted until 1970 and the fact that 70% of the students today are Catholic shows the turn around that has occurred in the last 30 years.

Most of the buildings on the grounds of Trinity, which covers 40 acres, date from the 18th and 19th century. The West Front, which faces College Green, was built between 1755 and 1759 and has the interesting feature of having the same design facing outside and inside. Another interesting place is the Examination Hall. It is home to a magnificent organ, saved from a 18th century ship and also a chandelier from the old House of Parliament (now the Bank of Ireland).

The Berkeley Library is the library most used by students today. One of the few modern buildings in Trinity, it was built in 1967 and is named after George Berkeley, who studied in Trinity at the age of 15 and went on to have influence in many fields including philosophy in North America. The Berkeley University in California is named after him.

The college chapel has stucco ceiling and fine woodwork. The chapel and the theatre were both designed by William Chambers in the late 18th century. The Campanile or bell tower erected in 1853 dominates the square.