Dating from the 16th Century, the exquisite Waterford Castle is situated on its own island, adjacent to a challenging 18-hole championship golf course 6 miles downstream from Waterford City. 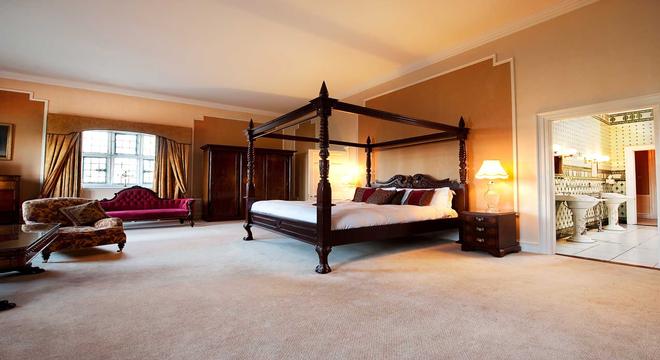 Dating from the 16th Century, the exquisite Waterford Castle is situated on its own island, adjacent to a challenging 18-hole championship golf course 6 miles downstream from Waterford City.

Ireland has many islands and many castles, but there are few castle isles like this. Waterford Castle is unique, set on an isle of 300 acres, a short private ferry from the mainland, and its history stretches back to the 11th Century. This sheltered isle was once home to the Fitzgeralds who during the 15th & 16th Centuries governed most of the south of Ireland and used Waterford Castle as their leisurely retreat. The original Norman tower was rebuilt in the 15th Century and forms the centrepiece of the present castle, which was substantially added to throughout the 19th Century.

The Castle is a splendid representation of Victorian Jacobean design with stonewalls and mock turrets shrouded in ages old ivy. Through the carved granite arch and studded oak doors of the tower gate entrance is the oldest part of the castle, the entrance hall decked in rich tapestries, Elizabethan Oak panelling, fine 16th Century plaster ceiling and dominated by its huge chimney breast with roaring fire and hand carved Fitzgerald coat of arms. Throughout its grand drawing rooms, Waterford Castle is luxuriously furnished with fine Irish antiquities and oil paintings in keeping with the charm and character of the hotel.

Each of the sumptuous guest rooms are wonderfully appointed, furnished with antiques and delicately set with period details, evoking the charm and splendour of a past age while being fully equipped with the comforts and conveniences expected by today's discerning traveller.

The hotel's Munster Room is the elegant venue for fine dining by flickering candlelight and closeted by oak panelling. Award winning cuisine is offered from locally sourced seasonal produce with samples from the menu such as, Seared Breast of Wild Mallard, Choucroute, Red Currents and Orange & Star Anis Reduction or Fillet of Aged Beef, Parsnip Crisps, Onion Marmalade and Bearnaise Sauce.

Waterford Castle's golf course is a challenging 18-hole championship course set across 205 acres of the island and was designed by world-class Irish golfer Des Smyth. The hotel's other activities include tennis, croquet and scenic walks and the setting alone provides for a unique experience.