Situated close to Carndonagh and Malin Head on Donegal's Inishowen Peninsula, Ireland's most northerly links comprises 365 acres of spectacular duneland and is practically surrounded by rolling hills and mountains with the only other boundary being the Atlantic Ocean.
Officially opened on April 2nd 1947, Ballyliffin Golf Club has two 18 hole courses: the classic "Old Links", and the magnificent new Glashedy Links, which opened to great acclaim in August 1995.

The Old Links at Ballyliffin

The Old Links is a classically old fashioned links. Like most fairways here, the terrain twists and tumbles in every conceivable direction. The Old Course bristles with charm, character and curiosity. And what a course it is! The course is host to the 2008 Irish Seniors Open

There is a great contrast in styles between the two courses, despite the fact that they share essentially the same topography and surroundings:

Glashedy offers another challenge with its vast undulating greens, enormous bunkers and fairways that twist and roll beneath towering dunes. It is a long course, and with the ever blowing wind, it can become a monster. It is difficult to pick any signature hole at Glashedy as each has its own charms but the par 3, 7th playing from a height to a green sited 100 feet below, does catch the eye. The long 13th is already being heralded as one of the best par 5's in Ireland , while the 14th is certainly one of the most seductive short holes in Irish golf. This course is a visual pleasure and a wonderful test of golf.

The Glashedy Links hosted the Ladies Irish Open in 1998 and the North West of Ireland Open in 2002.

The current clubhouse was opened in 2000 and is widely acclaimed for its location, design and the spectacular panoramic view of the golf links and Pollan bay. 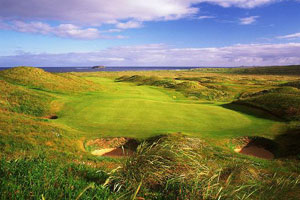 Comments
"The Old Course at Ballyliffin is the most natural course I have ever played." Nick Faldo

The Old Links Course at Ballyliffin Golf Club, in Co. Donegal saw one of the strongest fields in the 12 year history of the Irish Seniors Open for the competition's first visit from June 20-22 2008.

Last year's victor and dual Ryder Cup winner Costantino Rocca of Italy had set his sights on a successful title defence. In order to lay claim to the €67,500 ($100,000) winner’s cheque, Rocca would have to fend off the considerable challenge of the in-form European Seniors Tour rookie, Scotsman Sandy Lyle who celebrated the 20th anniversary of his US Masters victory by playing all four rounds at Augusta National recently. 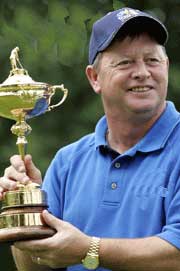 They were also joined by Ian Woosnam, 2006 Ryder Cup winning captain at the K Club in County kildare, who expressed his delight at the opportunity to return to play in Ireland.

There was only one Irish former winner competing in 2008, Joe McDermott, who was victorious at Woodbrook Golf Club in 1998.

Eamonn Darcy and Denis O’Sullivan, were amongst the home contingent bidding to end the foreign dominance of the Irish Seniors Open along with runner up Des Smyth.

Another recognisable name in the 2008 field was Sir Bob Charles, The 71 year old who finished second at the 2007 Wentworth Seniors Masters.

The 2008 Irish Seniors Open was again supported by Fáilte Ireland (The Irish Tourism Board) and AIB, who have been involved since the event's inception in 1997

The 'Old Course' was the venue for the competition. The 6,910 yards, par 71 Old Links course was upgraded and re-opened in 2006 by Nick Faldo, European Team Captain for this year’s Ryder Cup at Valhalla Golf Club in Louisville, Kentucky.

The title went to Juan Quiros of Spain who saw off the challenge of Des Smyth with a birdie on the 18th on the final day to finish the tournament on 1 under Par and at win by one stroke from a bitterly disappointed Smyth.

Commentary prior to the event at Ballyliffin:

John Farren, General Manager of Ballyliffin Golf Club, said: “We are delighted to welcome The European Tour back to our Old Links course, and are particularly proud to be the first Irish links to host the prestigious Irish Seniors Open. The Old Links is widely regarded as a treasure of world golf, and we look forward to showcasing the recent improvements made by Nick Faldo to a wider audience in June.”

Shaun Quinn, Chief Executive of Fáilte Ireland, said: “Fáilte Ireland is delighted to continue its association with the Irish Seniors Open, an event which affords us the opportunity to showcase the Irish golfing experience to an international audience. With over 430 courses across the country, we have something to offer all golfers – no matter what their skill level or budget. Ballyliffin Golf Club has for a long time offered a fantastic golfing experience to its visitors, and truly represents great value for money. We wish the club every success with its hosting of the event, and for the season ahead.”

Andy Stubbs, Managing Director of the European Seniors Tour, said: “We are delighted to be holding the Irish Seniors Open for the first time at Ballyliffin Golf Club, and we know that our Members are excited at the opportunity to play a true links course, which is reflected in the quality of the field. Our thanks go to everyone involved at the club for their tremendous enthusiasm and hospitality, and we would also wish to acknowledge the input of our Associate Sponsors Fáilte Ireland for their continued involvement in Seniors Tour golf, and AIB for their 12 years of support for the Irish Seniors Open.”

Billy Andrews, General Manager of AIB Bank, said: “In our 12 years as title sponsors of the Irish Seniors Open, we have had some wonderful experiences in fabulous venues with many of the European Senior Tour’s professionals. This year, the move to the renowned Old Links course at Ballyliffin Golf Club will allow us to continue this trend, and enable AIB customers in the north west of the country to sample the uniqueness of a Seniors Tour event.”

Séamus Brennan, Irish Minister for Arts, Sport and Tourism said: “It is a privilege to welcome the European Seniors Tour’s star golfers to Ireland. This tournament will bring to Ireland many of the legendary names of golf, and will provide the players with a demanding challenge over true links terrain. The rugged scenery will provide a captivating backdrop, and all involved can expect the traditional Irish hospitality, which attracts golfers from all over the world. This event has been supported through the Fáilte Ireland Sports Tourism Initiative, which sponsors events which enjoy a high-profile position in their own sporting calendar and can showcase Ireland as a major sports tourist destination. I have no doubt the competitors will enjoy the challenge which this scenic course presents, and that they will provide a weekend of exciting golf for the spectators and the international television audience.”