Situated on a quiet corner of Galway Bay lies the picturesque village of Ballyvaughan. Originally better known as a fishing village it has in recent years developed into a tourist centre. With the Burren lying a few miles south of the village, Doolin lying to the east and Galway to the north east, Ballyvaughan with its lively pubs and up market restaurants provides an ideal base for exploring these areas whist on a trip to Ireland.

Although the nearby Burren region has plenty to offer the incoming visitor, Ballyvaughan is not without its own attractions. Lying just three miles outside of the village en route to Lisdoonvarna is the first of the two sixteenth century castles to be found in the area - Newtown Castle. Recently restored, the castle provides an interesting guided tour and should prove a worthwhile experience relating information on the history, botany and folklore of the area. On the western side of the village about 6km out, lies the second sixteenth century castle - Gleninagh Castle. This castle was originally built by the O'Lochlain clan who were the chieftains in this region and who occupied it until 1840. This castle is well worth a visit as one will discover a holy well and medieval church lying in front of the castle. There is also evidence of prehistoric activity with a "fulacht fiadh" (cooking place) dating back to the Bronze Age to be found in the area. 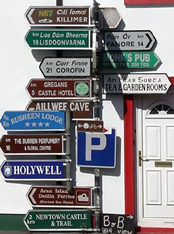 However the greatest attraction of Ballyvaughan is the spectacular caves which lie just outside the town - the Aillwee caves. Discovered in 1944 by a local farmer, the caves are estimated to be 2 million years old. With the largest passage 600m long and an abundance of stalactites and stalagmites the Aillwee caves are a dream come true for the cave-lover and potholer.

The countryside around Ballyvaughan is extremely scenic particularly the walk up to Corkscrew Hill which provides some of the most beautiful views of the breathtaking scenery of the North West Clare region. After exploring the area by day there is plenty of exploring to be done in Ballyvaughan by night. Traditional music is available in the pubs most nights during the summer months.