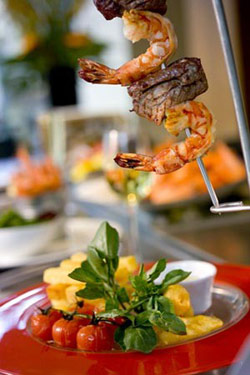 If you wish to sample some traditional Irish food, your best bet would be to go to the places in which lunches are served. Pubs are becoming more and more popular and have become famous for tasty, good value, traditional food. Although not all pubs serve 'pub-grub', you will recognise them, as the busiest pubs at lunch time. Good lunches are available from as little as 10 euro.
In the past few years, many fine gourmet restaurants have opened their doors to the demanding clients and despite the quantity of these fine establishments one should make reservations. The gourmet restaurants tend to be very busy indeed. A three course meal with wine for two people will usually cost you in the region of about €65. Service is usually included in to the price of your meal but some establishments will add another 10% on to your bill.

There are also numerous types of other restaurants in Dublin and throughout Ireland. There are many Italian restaurants in Dublin as well as Chinese, Japanese, Indian as well as vegetarian restaurants just to name a few. Prices and quality will differ from one establishment to the other. Another option is fast food and there is no shortage of fast food restaurants in most towns in Ireland. One of the favourite establishments frequented by locals and visitors alike is the one that serves fresh fish and chips. The selection will often depend on the catch of the day.
Many also consider going close to the coast, which is never far away from major tourist centres in order to eat some of the best sea food to be had anywhere in Europe. One has to say that no trip to Ireland would be complete without sampling probably the best salmon in the world. Although not always the obvious choice, sea food restaurants rarely disappoint the customer. The best area to eat fish and crustaceans is along the West coast and the Cork Kerry coast. In both areas there is a wide selection of excellent restaurants to be found, but excellent seafood can be had all over Ireland due to the high standards set by the restaurant owners and prepared by world class chefs for the ever so important and demanding customer.