Cahir is a small market town 10 miles south of Cashel. The town is ideally located for exploring the nearby many attractions in County Tipperary including the magnificent Cahir Castle, the River Suir and the Galtee Mountains.

Cahir castle, one of Ireland's largest castles is a must-see whilst on a vacation in Ireland. It was built in 1164 by Conor O' Brien and was handed over to the Butlers in the 14th century. It was surrendered without a fight to the Cromwellian Army in 1650. As a result the castle is in structurally excellent condition. It came into state ownership in the 1960s and received a major overhaul. Sitting on a rock island in the Suir, the castle is divided into outer, middle and the inner yards with a barbican at the entrance. 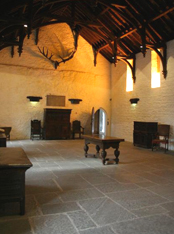 Another excellent attraction is the Swiss Cottage. Built in 1810 by the architect John Nash, the cottage contains tea rooms, a gracious music room and bedrooms, all of which are magnificently restored.

A limited train service is available with one train a day, however Cahir is on many of the express bus routes including that between Cork and Dublin.