Situated four miles north of the Cliffs of Moher overlooking the Atlantic Ocean on the west coast of Clare is the fishing village of Doolin. Stretching over several kms, Doolin provides the ideal base for exploring the Burren which lies in close proximity north of the village, or even for exploring the nearby Aran Islands with a daily round trip ferry service available from Doolin to Inishmore, Inisheer and Inishmaan.

Once an insignificant fishing village, Doolin has only developed as a tourist centre in the last twenty to thirty years coinciding with the revival of Traditional Irish Music. Today it's known as the "Mecca" of Traditional Music with people travelling from all over the world to participate and enjoy the traditional sessions available in all three of Doolin's pubs every night during the summer months.

For the visitor coming to Doolin there is so much to see both in and around Doolin that one will never be bored. The town is an ideal base for self drive tours of Ireland. The cave system around the area provides a "wonderland" for many cave-lovers and pot-holers with many of them coming from Britain to explore the "underworld". Both the longest cave in Ireland and the tallest stalactite in Western Europe are found within five kms of Doolin as well as the longest known underwater cave system in temperate waters. "The Green Holes" which lie north of Doolin Harbour provide some of the highlights waiting to be explored. 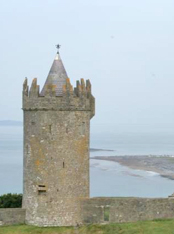 Doolin, like all areas of Clare, oozes with historical wealth with ancient megalithic monuments to be found in the area. There are numerous remains of Ring forts to be found to the west of the 18th century Killilagh church, however the most important ring fort remains to be found are the Doonmacfelim group located around Doolin Pier. There are two significant castles to be found in the area. The first of these, Doonagoore Castle was founded by Teigue MacTurlough O'Connor during the 14th century. It was restored in 1970 and is now the private residence of John O'Gorman. Nevertheless its well worth a visit to see the spectacular view of Doolin and the Aran Islands particularly at sunset. Ballinalacken Castle is the other castle in the area found five kms north of Doolin. This was built slightly later then Doonagore by the O'Brien Clan during the 15th century. This tower is in excellent repair with a stairway which one can climb to get a breathtaking view of the Burren. There are also a number of church remains in the area including Toormulin church which dates back to the 14th century.

After exploring Doolin during the day there is plenty of exploring to be done at night whilst on your Ireland vacation. The three pubs, O'Connors, McGanns and McDermott's providing traditional music every night during the summer and O'Connors and McGanns also provide excellent bar food. There are a number of other restaurants and excellent cafes in the town.