Dundalk is the county town of Louth, the smallest county in Ireland. Situated half way between Dublin and Belfast, its name comes from a prehistoric fort known as Dun Dealgan, said to have once been the home of the Celtic hero Cuchulainn. The town was on the northern perimeters of 'the Pale' during Medieval Times.

St. Patrick's Cathedral stands in the town centre. Built between 1835 and 1847, it is modelled on the 15th century King's College Chapel in Cambridge. It has wonderful examples of work in granite. The monument opposite the cathedral, known as the Kelly Monument, was erected in memory of a local sailor who drowned at sea in 1858. 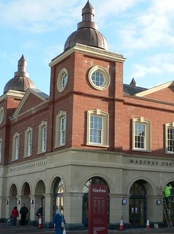 Also worth seeing is the Courthouse on the corner of Crowe and Clanbrassil Street. It is a fine building of Neo-Gothic design with large pillars on the outside. Also in the square is the stone Maid of Eireann, commemorating the Fenian Rising of 1798.

Omeath is an area of breathtaking beauty not far from Dundalk town. Associated with several mythological stories, including the Cattle Raid of Cooley, the area also has a rich historical heritage.

The hill of Faughart, just three miles north of Dundalk, is one of Louth's more famous historical sites. It is the site of many archaeological remains including the ruin of a medieval church, a motte castle and an iron-age hill fort. It is also where the Cattle Raid of Cooley took place.