Ennis has a colourful past and takes its name from "Inis" which is the Gaelic name for Island, due to its situation between two streams of the River Fergus. The Ennis Friary was founded by the O'Brien Kings of Thomond in the 13th Century and is now under the care of the Office of Public Works. It has numerous 15/16th Century sculptures carved in the local hard limestone. Vistors can see the figure of St. Francis, The Virgin Mary and Child.

The Eamonn DeValera Museum, which is open all year round, is a very interesting place to explore. It contains the personal collection of this historical past president of Ireland. The town dates back to the 11th century and it exudes character with its narrow streetscapes, quaint shops and shopfronts. It also has many pedestrianised streets, monuments and markets which give the whole town a medieval feeling. The town of Ennis is best explored on foot, in order to appreciate its appeal.

The town developed around the Franciscan Abbey, which was founded by the O'Brien Kings of Thomond in 1240. Over the years Ennis became a thriving market town, a characteristic which continues to this day. Ennis is one of Ireland's fastest growing and most dynamic towns. It became Ireland's Information Age Town in 1997 and has received a huge IT investment. The project means that almost all homes in Ennis have computer and internet access. It is a town that treasures its history and its culture and is proud to share this past with visitors.

As you travel through the Burren, 7,000 years of history unfolds before your eyes. This is a unique world, rivers flow underground and rare flora bloom from rocky beds. 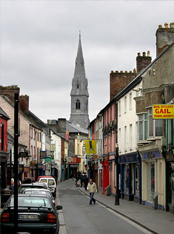 Aillwee Cave is located in Ballyvaughan. With its stalactites, stalagmites, relics of bears and a waterfall - this cave has become one of Ireland's largest attractions. One can travel through beautiful caverns, over bridged chasms and under weird formations.

Bunratty Castle and Folk Park is one of Ireland's most popular spots. Located on the main Limerick road, Bunratty Castle is the most authentic castle in Ireland. Built in 1425, it was restored in 1954 to its former medieval splendour. The folk park, set on 26 acres, recreates 19th century Ireland. The park features include a recreated village street, 8 farmhouses, a watermill, blacksmith's forge and a display of 19th century agricultural machinery.

The Burren Centre located in Kilfenora: the centre introduces us to one of the most enigmatic areas in Ireland, if not the world. Models, displays and audio visuals reveal the mysteries and complexities of this area.

Clare Heritage and Genealogical centre concentrates on the main theme of Ireland West 1800-1860. The centre portrays the traumatic period of Irish History under such headings as Land Tenure, Culture, Famine and Emigration. The centre offers a professional service to people wishing to trace their ancestry.

The Cliffs of Moher need no introduction. They are one of the top attractions in Ireland standing against the might of the Atlantic Ocean. The cliffs are six miles of limestone cliffs, in some places nearly seven hundred feet high. O'Briens Tower is located on the highest cliff, providing an exceptional viewing point.