Kilkenny City takes its name not from the Irish Ale now so popular around the world but from a humble monk named Canice who founded a religious settlement here on the banks of the River Nore in the 6th century. Once the medieval capital of all Ireland, Kilkenny has today firmly established itself as the nations' liveliest inland city, with non-stop entertainment throughout the sunny season and plenty enough craic on the other 365 days too.

In the past few years, the Saint Patrick's Day Parade, the international Cat's Laugh Comedy Festival in June, a highly acclaimed arts festival every August and live concerts by the likes of Bob Dylan and Paul Simon have confirmed the city's excellent reputation. With close on 80 pubs, a dozen restaurants and plenty enough guest bedrooms (from youth hostel to 5 star), the city can absorb visitors with great ease. In fact, Kilkenny thrives on visitors. It is almost as if the city was purpose-built to host large festive gatherings and yet, unlike other parts of Ireland, its popularity in no way detracts from its fundamental charm.

Kilkenny is essentially a very small city, a population of less than 25,000. As such, the best way to see it all is to get lost. Wander off-piste and see where your ambles take you. You may clunk against the wall of a cul-de-sac but there's every chance that the wall you clunked was erected by anxious French-speaking stonemasons 800 years ago seeking to keep the demonic Irish hoards out of the fledgling Norman settlement. Perhaps you'll stumble upon an ancient friary where monks still wear the brown robes made famous by the Franciscans in the 13th century. Or find your feet walking through the doors of a tiny wee pub where there's three fellows in the corner cranking out some feisty tunes on a bodhran and the auld codger behind the bar is awaiting your order whenever you please. The people of Kilkenny are a friendly tribe and if you're panicking about the way home, they'll direct you with grace and panache. 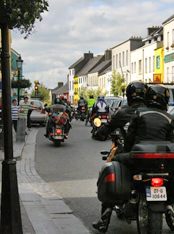 To be a city, one ideally needs to have a cathedral and here Kilkenny comes up trumps. St. Canice's is one of the most beautiful cathedrals in Western Europe. It is sited on the presumed location of Canice's original monastic settlement, on a hilltop near the River Brosna, a tributary of the Nore. The bulk of the church was built in the 13th century and substantially restored in the early 19th century. Visitors are welcome to confront their fear of heights and clamber up a spiral staircase of a Round Tower built so petrified monks could hide from axe-wielding Vikings. St Canice's is home to an intriguing array of monuments to the dead, some dating to the early days of the Anglo-Norman invasion. The Black Abbey offers another excellent slice of medieval history. It was built for the Dominicans in 1220 by the remarkable William Marshall, a man who unseated Richard the Lionheart in a jousting tournament, bullied King John into signing Magna Carta, married the sole heiress of Strongbow and Aoife, toured the Middle East on several Crusades and encouraged rabbit breeding in Ireland because he liked the taste of them.

Marshall was also responsible for the creation of the original four towers of Kilkenny Castle. Considerably modified by the Earl of Ormonde in the 1820s, the castle today houses an impressive collection of 17th - 19th century art and the guided tours are colourful and informative. Marshall also commissioned the building of the city walls. The net result of his efforts was the emergence of a thriving merchant class during the Middle Ages. Indeed two of Kilkenny's great landmarks date from the Elizabethan Age - Rothe House on Parliament Street (a Tudor townhouse built for a prominent merchant family) and Shee Alm's House (where the poor and destitute gathered to receive food and medicines, now home to the Kilkenny Touirst Office).

One of the unexpected delights of the city is its ample parkland. The Fair Green, behind the city, lends a delightfully rural ambience to the city's heart, reminding us how recently farmers paraded their prize cattle through the streets. When Lord Ormonde sold Kilkenny Castle to the State in 1967, he insisted the great rolling meadows be retained as a park for the citizens of Kilkenny. It was a tremendous boost for the city and today people of all shapes and sizes wander amid this lush woodland green. Another splendid walking route leads directly beneath the Castle, along the banks of the Nore, escorting you to open spaces decorated by sculptures both sensual and extraordinary.

Kilkenny is a city synonymous with arts and craft par excellence. Some of the finest shopping is to be found in the Kilkenny Design Centre, former stables to the Ormonde's horses. But jewelers, woodworkers, potters and craftsmen of great skill are burrowed down many a side-street or slip-way and again, one only need ask for directions. The annual Arts festival has bequeathed a legacy of artistic merit, perhaps best exemplified by the ongoing exhibitions in the Butler Gallery. The Watergate Theatre on Parliament Street regularly hosts plays that go on to grace the stages of Dublin.

In the immediate vicinity, there are plenty of golf courses, go-kart tracks, equestrian and leisure centres to keep visitors in full trim, or perhaps one's visit coincides with a horse race meeting at Gowran Park or a busy schedule in the city's greyhound track.

Kilkenny is fast establishing itself as the Gourmet Capital of the Sunny South East. With some 100,000 international visitors passing through the city every year, every pub or restaurant worth its salt thrusts hypnotic menu-filled blackboards out onto the street to lure the punters in. The majority are randomly spread around the southern or Castle side of the River Nore which splits the city into two halves. The pubs again are too numerous to mention but rest assured there are pubs to suit all types. Noisy pubs, silent pubs, sporty pubs, fiddily-diddily pubs, gay pubs, newspapery pubs, foody pubs, old codger pubs, young buck pubs, funny pubs, funny ha-ha pubs, you name it.

Kilkenny is a city that does not disappoint. It has a confidence about it stretching back 1500 years to its first days as a hang out for hermits and engulfs most of the major events subsequent to Irish - and often international - history. And today that self-belief, perhaps best summed up with the county's champion hurlers, has created a delightful city of marble pavements, stately trees, epic streetscapes, rural aromas and a hearty understanding of a good night out.