This historical and fashionable town in West Cork lies 29 km south of Cork city. A town which played a pivotal role in Irish history, it is now one of the most popular and fashionable locations in the country. Kinsale has much to offer the increasing numbers of visitors each year. Known as the Gourmet Capital of Ireland, Kinsale's location ensures a plentiful supply of seafood for the town's restaurants and eateries. These premises, in guaranteeing their reputations, insist upon the highest quality of locally produced meat, vegetables and dairy produce. Food is taken seriously here - an annual Gourmet Festival is organised each October and a Good Food Circle works to maintain the town's famously high culinary standards.

This maintenance of high standards extends to the appearance of the town. The residents of Kinsale take a great pride in their town and this commitment has led to the town winning various Tidy Town Accolades. This pride is justified though as the town has an extremely significant past. 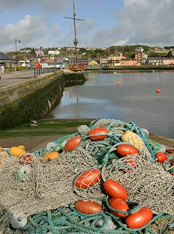 In its early days, the town benefitted from its position at the estuary of the Bandon River. The river is tidal and in an age when water transport was dominant until the 18th century, this was very important for the inland towns. The famous Battle of Kinsale of 1602 was a turning point in Irish history with the Irish defeat permanently destroying Ireland's hopes of independence from England during that era. English rule was firmly established in Ireland from this battle onwards. Although the English had been in Ireland since 1169, their influence had not stretched much further than Dublin.

While in the town, you would be well-advised to explore the historical sites around the area. Two miles east of Kinsale in Summercove, Charles Fort is a classic example of a star-shaped fort. There are five bastions: two defended the harbour while the other three were landward bastions. In 1690, immediately after the Battle of the Boyne, the fort was attacked by Williamite forces. Guided tours are available should you wish to learn more about the history of the fort. Desmond Castle is another place which is worth a visit. Built as a custom house by the Earl of Desmond in 1500, it has an interesting past. In 1601 it was occupied by the Spanish and later, during the American War of Independence, used as a prison for captured American sailors. In 1747, it was engulfed by fire which killed 54 prisoners who were mainly French sailors. This tragedy gave the castle its other name, French Prison. In the late 18th century, the castle was used as a borough prison and then as a workhouse at the beginning of the Great Famine.

An extensive selection of pubs, restaurants and hotels are available as would be expected from such an acclaimed centre of tourism. The yachting and sailing fraternity frequent the town through the summer and the Point to Point Festival at the end of May is just one of the town's many annual events. You would be well advised to arrange your accommodation before you arrive in the town as you can be guaranteed that others will have had the same idea.