The administrative, commercial and cultural centre for Northern Ireland, Belfast is a fascinating city of huge character, a city ingrained with the history of this country

Belfast is a city that challenges preconceptions; it is a city in the process of rebuilding and transformation with huge amounts invested in Belfast in the recent years following the peace process. But while Belfast is reinventing itself as a cosmopolitan, urban city it still retains much of its earlier Victorian and Edwardian character.

In terms of age the city of Belfast is only in its adolescence, but what an eventful youth it has had. Its name comes from the Gaelic Beal Feirste meaning mouth of the sandbank and that is pretty much all there was to Belfast until the 19th Century. 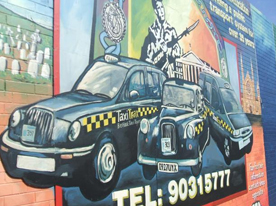 Belfast was the only city in Ireland to feel the full effects of the Industrial Revolution . As the linen and ship building industries grew, so did the town from a population of 20,000 in 1800 to 400,000 by World War One. After the partition of Ireland in 1921 Belfast was made the capital of Northern Ireland and was retained by the United Kingdom. During World War Two Belfast was second only to London in being devastated by German bombing raids.

The City had never fully recovered before the outbreak of the Troubles in 1969 and for the following three decades images of Belfast were often cast with violence and bloodshed. However since the ceasefire of 1994 and Good Friday Agreement of 1998, Belfast's fortunes are turning very much for the better with vast areas undergoing redevelopment and tourism really taking off.

Belfast has a whole lot to offer from the neoclassic City Hall and other 19th Century buildings around Donegall Square, to the Harland & Wolf shipyards that built the Titanic, from the grand buildings of Queen's University, modelled on Oxford's Magdalen College, the gracious botanic gardens and the unmissable exhibitions at Ulster Museum, to the modern interactive attractions in the Laganside's Odyssey Complex and from the many historic pubs along Belfast's Entries, the oldest parts of the city dating back to the 17th Century, to its ever growing number of contemporary stylish bars and top restaurants.

Around the city is Belfast Castle , built in the style of Balmoral in Scotland, on the slopes of Cave Hill, which form a stunning backdrop to Belfast, and the palatial sprawl of Stormont, the seat of power for Northern Ireland. But perhaps the most captivating sights are the emotive murals of West Belfast outlining the turbulent past and living history of the two factions along the Falls Road and the Shankhill districts of the city.