Cape Clear Island off the West Cork coast is Ireland's most southern inhabited island. The island which is just 3 miles long by 1 mile wide, lies just 8 miles off the coast of Cork. The island is accessible by boat from the village of Baltimore. Three miles west of the island stands the solitary Fastnet Rock. To the northwest stretches the Mizen Head, the mainland's most southerly point.

Cape Clear's wild romantic scenery makes it the ideal location for a honeymoon in Ireland with its sparkling harbours, cliffs and lakes. Heather, gorse and wild flowers cover the rugged hills all contribute to the island's unspoiled charm.  Myriad stonewalls have a patchwork effect on the varied landscape. Megalithic standing stones and a 5000 year-old passage grave, a twelfth century church ruin, a fourteenth century O'Driscoll castle, cannonaded in the early 1600s, suggest times past. Saint Ciarán, the island's patron saint, is allegedly the earliest of Ireland's four pre-Patrician saints. 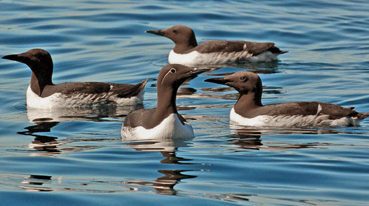 Cape's remote island location, coupled with its proximity to the continental shelf, makes it the foremost centre for birdwatching in Ireland. The best month is October followed closely by the month of April. Whale, leatherback turtle, sun fish and shark are spotted every year and dolphins regularly. Removed from the hustle and bustle of mainland life, Cape Clear offers relaxation, nature and peace.

Cape Clear Island is a Gaeltacht and in the summer many students come in order to perfect their Irish and participate in outdoor games and activities. Cape Clear is also an ideal location for activities and sports such as windsurfing, canoeing and fishing. Scuba divers can prowl old wrecks and precipitous reefs. The lively pubs have frequent formal and informal sessions and many aficionados bringing their instruments. When planning a vacation in Ireland due to the limited amount of accommodation on the island, it is recommended that one should book in advance, especially during the busy summer months. After the summer rush of activity, autumn is found to be a richly quiet season.