An ideal choice for those interested in Irish luxury travel, Ireland has a vast number of castles and castle hotels dotting the countryside, from romantic ruined castles and castle towers, to the fine stately castles of Irish Chieftains and Irish Castle Hotels. When it comes to luxury Irish vacations, a stay in a castle is the perfect choice. Castles in Ireland are filled with history and character and there are even some haunted castles to discover.

History of the Irish Castle

Most castles you'll see in Ireland are less than ostentatious; they were not built to be the royal palaces that you'll find in Britain, as Ireland has had no royalty for a thousand years. Instead they were fortified homes for chieftains, or Anglo Norman settlers and were designed primarily for defence. Many of these castles are medieval in origin, dating from the 11th to the 15th century. While some of the more elaborate and elegant castles you may find along the way owe their origins to the flamboyant Georgian era or the neo gothic revival in the Victorian Age.

How many castles are there in Ireland?

It’s said that there are approximately 30,000 castles and castle ruins in Ireland, which is simply astonishing and means you can’t go far without a view of a romantic castle in the Emerald Isle!

Ireland's two most beloved castles are Bunratty Castle and Blarney Castle,  as well as two of the most visited tourist attractions in Ireland, outside of Dublin. 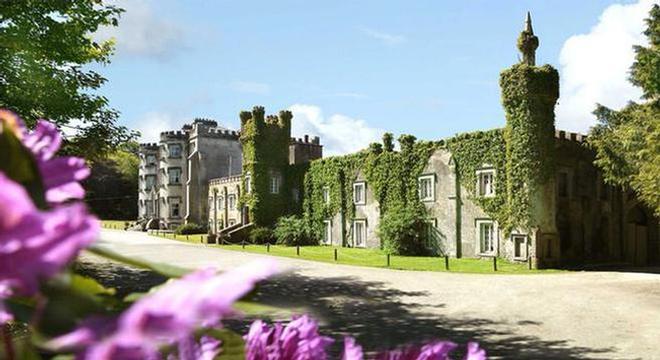 Dating back to the 14th Century and once belonging to the O'Brien Clan, who were the High Kings of Munster, Bunratty is located in County Clare, near the River Shannon.This castle is famous for its medieval banquets that for many visitors, from the United States in particular, present a great last night in Ireland before returning home via Shannon Airport. Today the castle forms the centrepiece of an excellent Folk Park outlining Ireland's history with a recreated 19th Century Irish town.

Another popular choice for visitors is Blarney Castle in County Cork, which is home to the famous Blarney Stone which, according to legend, bestows the gift of eloquence and Irish charm - or as we say; "the gift of the gab". For years countless numbers of people have descended on this 15th Century castle and climbed its tall tower to kiss the Blarney Stone.

Situated on the banks of Lough Corrib in County Mayo, Ashford Castle is a majestic building of Victorian neo gothic architecture, though the castle's history dates back to 1228 when it was founded by the Anglo Norman de Burgo family. The Guinness family also owned Ashford Castle and the castle has hosted the Prince of Wales George V and President Ronald Reagan on his state visit to Ireland.

One of the more luxurious castle hotels Ireland has to offer, Dromloand Castle has also had a number of famous guests, including US presidents George W. Bush & Bill Clinton, Nelson Mandela and a host of Hollywood stars. Situated in exquisite grounds in County Clare; Dromoland dates back to the 16th Century and is the ancestral home of the O'Brien Clan and Brian Boru the last High King of Ireland. Like Ashford, Dromoland Castle offers the utmost in five star luxury and is steeped in historic character.

Two other historic Irish castles with a special interest of their own are Glin Castle in County Limerick and Ballygally Castle in County Antrim, both of which are reputed to be haunted castles.

Situated on the banks of the River Shannon and this elegant 18th Century castle has been home to the Knights of Glin, the Fitzgerald family for over 700 years. Glin Castle is also home to a friendly ghost, nicknamed Gerald.

Located along the scenic Antrim coastline and dates back to 1625. The central tower of this stark and austere castle is said to be haunted and though there is a bedroom there, nobody has ever braved the full night.

You'll find more detailed information on Ireland's castles and Ireland's visitor castles throughout this website, and we have put a number of suggested escorted tours and self-drive itineraries that enable you to visit some of the best castles in Ireland and add that touch of luxury to your stay. Get in touch with our team today to plan your perfect Irish castle tour!