A characterful town with a unique place in Ireland's heritage, Cobh has a rich maritime history as the embarkation port for the many people that emigrated from Ireland.

The distinctive town of Cobh (pronounced cove) is built onto the slope of Great Island in Cork Harbour just 15 miles from Cork City. The towering St Colman's Cathedral, French Gothic in style, stands at the top of the hill overlooking the tall brightly coloured buildings of Cobh and the dockside of the most important port of emigration in the country. The port was called Queenstown, renamed following a visit from Queen Victoria in 1849, until it reverted back to its Irish name in 1922. 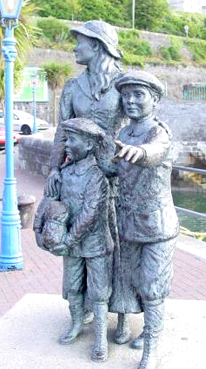 Cobh's long maritime history includes the world's first yacht club, the Royal Cork Yacht Club established in 1720, the first steamship to sail across the Atlantic, the Sirius, sailed from Cobh in 1838, Cobh was the last port of call for the Titanic on her tragic maiden voyage and Cobh was where survivors of the Lusitania were brought after the ship was torpedoed by German U-Boats off the Old Head of Kinsale in 1915. 150 victims of the Lusitania are buried in graves in the Old Church just north of Cobh.

Yet what Cobh is most associated with is the mass exodus from Ireland during the 19th Century. Once called "the saddest place in all of Ireland", Cobh was the embarkation port of some 2.5 million Irish emigrants fleeing famine and poverty between the 1848 and 1950. Their tale is told in the award winning exhibition centre, the Queenstown Story, housed in the disused Victorian Railway by the dockside.

Though a town with a sorrowful past, Cobh is a vibrant hub of activity and interest. A quaint town of narrow streets, winding up steep hills, Cobh has a number of old-fashioned pubs and good quality restaurants. Cobh is a popular spot for sailing and there are harbour cruises around Haulbowline Island and the former prison of Spike Island.