Northern Ireland's second largest city, Derry, also known as Londonderry and Doire, is a fascinating walled city with a long and absorbing history.

Situated on the banks of the River Foyle and close to the border with Donegal, Derry is one of the longest continually inhabited places in Ireland with has over 1,450 years of history . One lasting reminder of earlier settlers is the Iron Age fort, the Grianan of Aileach, on a hill overlooking Derry, just over the border in Donegal. In the 6th Century, St Colmcille/Columba established a monastic settlement in Derry.

Throughout the 16th Century the English made a number of attempts to settle in Derry and in 1609, James I determined to conquer Ulster granted vast tracts of land to English and Scottish noblemen in what is known as the Plantation of Ulster. James instructed the wealthy London guilds to build the city walls, which still enclose Derry today, and in honour of this connection the name was changed to Londonderry.

In 1688, the city was to witness one of its most momentous events with the Great Siege of Derry. The stage was set for a prolonged stalemate between the besieged protestant supporters of William of Orange and the catholic forces of the Earl of Antrim and James II. The Great Siege lasted for 105 days, the longest in British history and was finally broken when a relief ship Mountjoy broke through the boom that was barricading the River Foyle.

An estimated third of the city's 30,000 inhabitants died during the siege leaving a legacy that is still remembered today. Along the city walls still sit the 17th Century canons that defended the city during the siege. 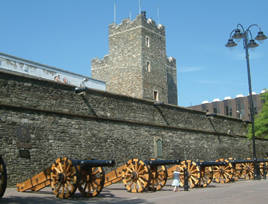 During the 19th Century, Derry was one of the main emigration ports from Ulster to the USA, a point remembered with the sculptures of Waterloo place and groups of these emigrants founded the colonies of Derry and Londonderry in New Hampshire. Throughout World War Two, Derry was a thriving naval base with 20,000 Allied sailors of various nationalities and was where the German U-boat fleet surrendered at the end of the war.

Derry's more recent history is marked by the Troubles and the city saw more than its fair share of tragedy and violence over the last 30 years. A tour of some of the former trouble spots give you a unique insight into the living history of the not so distant past, from the famous murals of the Bogside, Free Derry Corner and the Fountains area to the symbolic sculpture Hands Across the Divide, a reminder to the two communities to reach out to one another.

As well as excellent tours around the city and its 17th Century walls, Derry also boasts a number of excellent visitor attractions for people on an Ireland vacation. The Tower Museum is an award winning attraction, telling the history of the city and includes a range of exhibitions and the Guildhall, St Columb's Cathedral, St Eugene's Cathedral and St Augustine's Chapel are all historic buildings of stunning architecture.

At night there is ample opportunity to share a pint or two with the friendly locals in the many bars of Derry noted for their excellent live Irish music. Derry in Northern Ireland is a must-see for those considering self drive tours of Ireland.