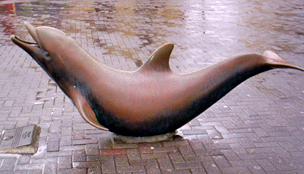 Dingle is the most westerly town in Europe and the chief town of Dingle Peninsula. It is an excellent centre for the visitor and though a progressive town, it still retains much of the old-world atmosphere of a fishing village. Dingle is an Irish-speaking fishing port and is home to Ireland's most famous dolphin "Fungie".

Fungie, who is a bottlenose dolphin, has been swimming with the boats and tourists in Dingle harbour since 1984. You can take a one hour boat trip in summer months to see Fungie up close. The town has recently erected a bronze statue on the Pier to its most famous aquatic visitor.

Mara Beo - the Dingle Ocean World Aquarium is set overlooking the scenic Dingle harbour and reveals the fascinating species that live in the waters around the magnificent Dingle Peninsula. This experience is also a journey through the Peninsula's ancient sea culture and its people's interface with the sea from the pre-Christian era to the present time - be sure not to miss the Tunnel Tank and Shark Tank.

The town is an ideal base for exploring the Dingle Peninsula, attractions include Gallarus Oratory which is located 3 miles north west of Dingle - probably the best preserved early Christian Church in Ireland. It was built in 7th century and is a classic example of dry-stone corbeling. The structure is still watertight after more than a thousand years.

The Dingle Way walk comes through the town by way of the Connor Pass. This mountain pass offers spectacular views of Brandon Bay, Tralee Bay and Dingle Bay if the weather is clear. It was from Brandon Bay that St. Brendan discover North America in the 6th century. St. Brendan was the person who inspired Christopher Columbus to rediscover the New World almost 900 years later.

Just about every bar in Dingle offers traditional Irish music during July and August and the town buzzes with locals and tourists.