"And fishers say along the beach a phantom boat is seen

To gently glide by pale moonlight adown by Lackagh stream."


Every castle has its legends of tragedy, romance, and...ghosts. Doe Castle is no exception. A song written by a Creeslough poet recounts the tragic love story of Aileen and Turough O'Boyle. When Aileen's father learned of her love for the young Gaelic chieftain, O'Boyle, he ambushed, imprisoned, and tortured him. Then in the night, he dragged the young O'Boyle to the base of a tree where he slashed him with his own sword until he died. Legend says that it took many slashes to kill the hearty young warrior, and that as the sun rose and lit up the land, he breathed his last. Aileen witnessed all of it from the round tower of the castle. In desperate agony, she jumped from the tower window to her death. Local fishermen, even today, swear that they have seen the phantom boat and the ghosts of two young lovers, smiling and rowing.

Built on a jutting rock and guarded by an inlet of Sheephaven Bay, Doe Castle stands as a might giant on the shores of the bay. Considered the strongest and safest castle of its time, it has a central tower with battlements and bawn (enclosure). The tower stands fifty feet high, has one room on each of the four floors with walls approximately eight feet thick. One of the rooms-the one where young O'Boyle was held-called The Dungeon, was located on the third story instead of the bottom one. Lighted only by one open loophole in the stonework, this mysterious chamber had a single entryway: a doorway four feet high surmounted by a small pointed arch of cut stone. The doorway was built a full two feet higher than the level of the Dungeon and joins with a winding stairway within the thickness of the walls leading directly to the room above it. This means that any visitor to the Dungeon must climb to the fourth floor, cross it diagonally then make his way down the stairs. 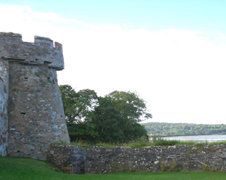 The largest room in Doe Castle is its great hall, some 35 feet long and 18 feet wide. A shaft in the South West section of the castle bawn indicates that at one time, a well was there, long dried up by now.

It is recorded in written documents that owner Maolmhuire (mwill-murra) an Bhata Bui (of the yellow stick) ordered the well closed following the death of one of his wards, a young woman named Judith who was in love with his nephew, Hugh McSweeney. (Appointed chief of Doe Castle in 1596, Maolmhuire was awarded a hefty, yellow colored blackthorne staff. He was known for dashing the brains out of irritating or non-compliant-not well versed in the protocol of their host-guests). During a routine nightly inspection, Maolmhuire overheard bits of a conversation between young Hugh and Judith. Suspecting a conspiracy, the enraged Maolmhuire swung his yellow staff to kill his nephew, but Judith stepped between them and received a blow to her temple. She stumbled on the kerb of the well and tumbled headlong to her death at the bottom of the well.

Initials above the door, GVH, refer to a more recent owner, George Vaughn Hart, a British general in India who inherited the castle in 1800. Ah, but that is another story...

Hours: open every day (interior access restricted due to construction)

How to get there:

(see attendant in cottage next door for history and information booklet)