Donegal Town is located at the mouth of Donegal Bay in the Northwest of Ireland and surrounded by the vista of the Blue Stack mountains. The area offers visitors a rugged beauty. From Slieve League, the highest sea cliffs in Europe, to the miles of golden sandy beaches, the region provides activities ranging from high octane water sports to unforgettable country strolls.

Overlooking the town can be seen the remains of several earthen forts. There is a record of an early Danish fortress being destroyed in the town by Murtagh Mac Lochlainn, High King of Ireland in 1159.

The O'Donnell Castle in the town was built by the first Red Hugh and his wife Lady Nuala. They also brought the Franciscan Monks to Donegal. The Abbey was built in the same year, 1474. There were two Red Hughs. The last one was the most colorful. He was captured by the English and thrown into Dublin Castle but he eventually escaped and managed to make his way back to Donegal. It was said that he suffered frostbite during his escape and as a result lost a big toe and had to ride into battle from then on.

The last great battle in which the O'Donnells were involved was the Battle of Kinsale in 1601 where they were badly defeated. Red Hugh went to Spain to seek help to resume the fight but he died there. Other Chieftains including the O'Donnells and O'Neills were forced into exile. This became known as the Flight of the Earls and it took place from Rathmullan in 1607. Before going they partially destroyed the castle to prevent the English forces from using it.

The Battle of Kinsale led to the plantation of Ulster. O'Donnell Castle and their lands were given to an English Captain, Basil Brooke, who carried out major reconstruction work and added a wing to it known as the manor house. Basil Brooke eventually moved to Lough Eske where he built a house.

The Franciscans were brought to Donegal by Hugh O'Donnell and his wife Lady Nuala and it was at her request that they set up a community here. They contributed greatly to the spiritual needs of the area. It was here that Brother Michael O'Cleary with Peregrine O'Cleary, Peregrine O'Duignean and Fearfasa O'Maolconry worked on their famous Annals of The Four Masters which is a full account of Gaelic Ireland since what they took to be its birth until the Flight of the Earls. It took several years to compile but was actually written up from 1632 to 1636. 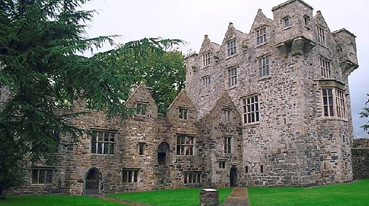 Today, Donegal Town is the center of activity for South County Donegal. The town center, the Diamond is where the Killybegs, Ballyshannon and Ballybofey roads converge. The recently restored Castle should not be missed. As recently as the 1950s South Donegal was served by a narrow gauge railway which ran northwards from Killybegs to Stranorlar, with Donegal Town serving as the main terminal. The railway heritage center located in Donegal Town contains many artifacts, memorabilia and photographs about the history of the railway in the County.

Donegal contains many fine churches, one of which is St. Patrick's, a most impressive edifice which overlooks Upper Main Street. It was built in 1935 and was constructed using local materials. These included granite extracted from Barnesmore Gap and sandstone taken from Mountcharles. Located beside the castle is the Church of Ireland which was built in 1828. This is of gothic design and includes a fine clock tower.

There is plenty of night life in local pubs, especially during the summer months. Try Mc Groarty's Bar, The Diamond, a famous sports pub in the county. Good music sessions, sing songs, pub quizzes and the famous mid-summers walk are amongst the events the place holds.