One of the most interesting historic towns on the east coast, Drogheda is situated 28 miles north of Dublin . A settlement really began to take shape first in Drogheda, following the colonisation of the town by the Danish Vikings in 910. Two centuries later the Normans built a bridge over the River Boyne allowing the town to develop on both sides of the river. Along with the bridge the Normans built walls around the town and by 1412, Drogheda was the largest British town in the country.

Drogheda was also the scene of Cromwell's worst massacre resulting in the killing of three thousand people at the Battle of the Boyne. Sir Aston who led the Catholic defenders, was beaten to death with his own wooden leg. This was a major set back for the town and it was the 19th century before Catholic churches were built again. One of the first to be built was St. Peter's Church on West Street. Dating from 1791, it dominates the centre of the town. Within the church is the head of St. Oliver Plunkett, a former bishop of Ireland who was executed by the British for treason. The very next day it emerged that the whole story had been fabricated. 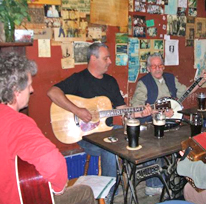 Today, Drogheda is fast becoming a satellite town of Dublin with many commuting each day. During the summer months the Drogheda Historical Society have guided tours through the town.

One of Drogheda's strengths is the wide variety of entertainment available. Weaver's has live music as well as DJs at the weekends. Carbery's pub on North Street has live traditional music on Tuesdays. Other entertainment includes the cinema and the Drogheda Theatrical Centre Stage drama and musical events.