Enniscorthy is an attractive town situated on the banks of the river Slaney. A thriving market town, it is dominated by Enniscorthy Castle.

This impressive Norman castle dates from 1205 and was a private dwelling until 1951. The poet Edmund Spencer lived in the castle for a period and it is said that Queen Elizabeth I gave him the castle for all the good things he said about her in the great work, The Faerie Queene. The castle was the site of many fierce battles during the Cromwellian years and also the 1798 Rising.

The castle is also used today to house the County Wexford Museum, which contains thousands of items of memorabilia from events such as the 1798 Rebellion and the 1916 Rising. The events of the year in 1798 are told in full, including the battle at Vinegar Hill where the massacre of 20,000 rebels occurred on one day alone. Armed with only agricultural pikes, the rebels were making one last desperate attempt against the crown forces armed with cannon fire. 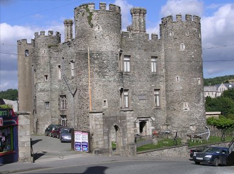 Also in Enniscorthy, there is St. Aidan's Cathedral standing on a towering hill overlooking the river. The Neo-Gothic building was designed by A.W. Pugin, whose most famous work includes the Houses of Parliament in London.

The train station in Enniscorthy is on the main line between Dublin and Rosslare giving you easy access to seaports and airports. Accommodation is widely available in Enniscorthy.