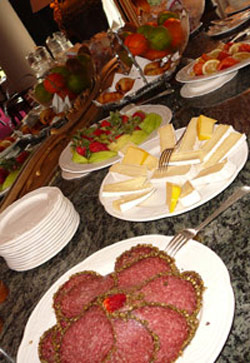 When many people think of food in Ireland , they think of the traditional dishes of bacon & cabbage, Irish Stew and Crubbeens!

Though there has been something of a revival of the traditional favourites, a sense of "Modern Irish" cooking has been developed over the last 20 years, influenced by flavours and indeed chefs from Europe and the rest of the world.

The Irish restaurant scene is a real cosmopolitan mix with an influx of Italian, French and pan Asian eateries sitting alongside native restaurants, who themselves have devised menus to cater for world tastes. While Ireland's coastal areas, particularly West Cork and Kinsale are renowned within epicurean circles for their excellent seafood.

In the pubs too, you'll find food of great quality up and down the country. Gone is the idea of pub grub, replaced with wholesome traditional staples, like those mentioned above, or gastro pub dishes. Though most will still knock up some cheese & ham toasties on request!

All this focus on quality has inevitably pushed up prices. The price of a main may be between 15 to 25 euro, with starters from around 5 to 15 euro, while good lunches are available from around 10 to 15 euro. But the value is most certainly there.