Galway is unlike any other town in Ireland. Indeed, Yeats described Galway as the "Venice of the West". Located on the West coast, on the shores of the Atlantic, Galway is Ireland's cultural capital. Free spirited, artistic and bohemian, it has an ambience all of its own.

The origin of Galway ("Gaillimh" in Irish) is uncertain. It is known however, that among the ancient Irish, foreigners were called "na Gall", hence the suggestion that Gaillimh was "the place of the foreigners". Galway originated as a small fishing village at the mouth of the Corrib. Anglo-Normans invaded the territory in the early 13th century and built walls around the town later that century. The power of the city was eventually diverted to 14 "Tribes", affluent families of English descent, and the city became known as the "City of the Tribes". Galway traded in wine, spices, salt, animal product and fish and became the next port after London and Bristol. The wealth of its citizens was expressed in the many fine stone-faced buildings of which "fourteen remarkable edifices, castles or mansions of the nobility" are specifically shown in the city's famous Pictorial Map of 1651.

Galway is a vibrant colourful city full of life in the summer months when thousands of people throng its pedestrianised shoppping streets or stop for a bite to eat or drink in one of its many cafes and bars. It retains a very cosmopolitan atmospehere and is renowned for its easygoing charm and warm welcome. As a gateway to the wild Connemara region or the Aran Islands, Galway is an absolutely essential stop on any tour of the West of Ireland. The Galway Arts festival each July turns the city into a mecca for arts lovers throughout Europe and further afield with a dazzling array of events to choose from. The arts festival is preceded by the Galway Film Fleadh (Festival in gaelic) which grows in stature each year and is noted for premieres of Irish films in recent years. 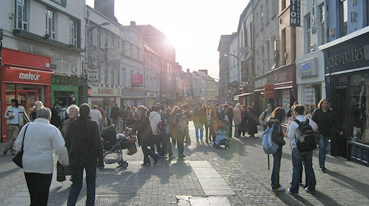 The Church of St. Nicholas of Myra, started in 1320, has become its most important building. Galway became a Royal Borough in 1396 and when in 1484 Richard III of England gave it mayor status, power was transferred from the de Burgo to the leading fourteen tribes or merchant families. The aftermath of the Parliamentarian and Religious Wars of the 17th Century saw Galway much reduced in status. A partial recovery based on its water-power industries, occurred during the 19th century. In the last quarter of this century, Galway has concentrated on promoting its tourist potential and building a strong local industrial base. Many Galway people are Irish speakers and much of the Gaelic culture is preserved. Irish speaking areas include many of the smaller towns and villages as one makes their way westwards through Connemara towards Clifden , as well as the Aran Islands of Inishmore, Inishmaan, and Inisheer. Galway is a city, a mentality and a way of life. It represents a carefree vitality and an appreciation of the good things in life. From this pulsating heart, the rest of the country flows.

The Cathedral of Our Lady Assumed into Heaven and St Nicholas was opened in 1965 and is possibly Galway's most impressive building. Situated on the site of the infamous County Jail, which was closed in 1939, the Cathedral stands resplendent, overlooking the town. Its copper domed roof and Hiberno-Romanesque architecture ensures that the Cathedral can be seen for miles. Eyre Square is Galway's most identifiable landmark. The central park was renamed John F Kennedy park, following the visit of the American president in 1963. It contains a number of attractions, including two large cast iron Cannons presented to the Connaught Rangers at the end of the Crimean War of 1854-1856. There is a statue of Padraic O'Conaire, the author of Field and Fair, M'asal Beag Dubh and numerous tales and stories written in Irish.Visitors to the area are attracted to sit beside the statue of the little storyteller to have their photograph taken. The Fountain in Eyre Square consists of a copper-coloured representation of the sails of the Galway Hooker. The Galway Hooker was a traditional fishing boat, unique to Galway, which has gained fame due to its widespread use in history. It has long been used as a symbol for the county Galway .

Lynch's Castle is located on the corner of Abbeygate Street and Shop Street. It is a fine example of the blending of old and new. It is an illustration of a "town castle", popular homes of merchants in 15th century Ireland. James Joyce was a regular visitor to Galway. His wife and muse, Nora Barnacle was born in the city's Bowling Green area. The Nora Barnacle House is now a small private museum, which has retained its former character. It is open to the public during the Summer months.

The Claddagh is the part of Galway linking the Spanish Arch area with Salthill. People have been gathering seafood and fishing from the Claddagh for centuries. Historically, its existence has been recorded since the arrival of Christianity in the 5th century. Throughout the centuries, the Claddagh people kept Galway supplied with fish, which they sold on the square in front of the Spanish Arch. The area has been immortalised through the song, "Galway Bay" and internationalised through the Claddagh Ring. The Spanish Arch, located on the banks of the river Corrib, was built in 1584. It was originally an extension of the famous city walls, designed to protect the quays. It is in fact a misnomer. There is no proven association with the Spanish in Galway and the building of the Arch. Historically it was known as The Blind Arch and it was located on the site more appropriately known as the Ceann na Bhalla (The Head of the Wall). The Arch also features a wooden sculpture, entitled Madonna of the Quay.