Ireland has many castles tracing the country's tumultuous history, many carry the scars of battle. For some castles the horrific events they have witnessed are still being played out within the castle walls.

Here is our guide to the haunted castles of Ireland. 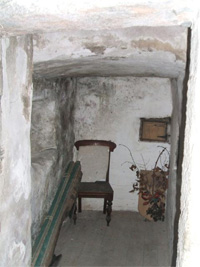 Situated along the scenic Antrim coastline Ballygally Castle dates back to 1625. The central tower of this stark and austere castle is said to be haunted by the ghost of Lady Isobel Shaw, who plays tricks on guests by knocking on bedroom doors at the dead of night. Kinnitty Castle in Co. Kildare was built on a druidic site and is said to be haunted by a group of Druids. But the most haunted castle in Ireland is Leap Castle in County Offaly, it is also regarded as one of the most haunted places in Europe and has been the subject of various research projects and has featured on a number of television programmes.

Throughout its 400 year history Leap Castle has witnessed a number of dastardly deeds and horrific events. One of the most famous events concerns the Bloody Chapel. Leap was the stronghold of the O'Carroll Clan and when the chieftain died n 1532 a power struggle broke out between the his sons. One was a priest and as he was saying mass in the chapel one Sunday, his brother stormed in and slew him on the altar. This shocking act is the story behind the castle's main haunting, that of the priest who walks the halls. 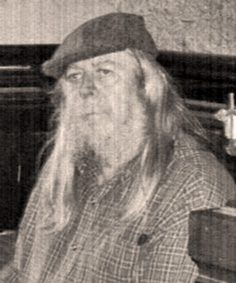 But when workmen renovated the chapel in the 19th Century, they uncovered a new horror. They found a hidden room behind the altar, with a trap door, underneath which there was a spiked oubliette. Unsuspecting victims would fall through the door to their deaths on the spikes below, those that survived were left to rot and starve to death. When the workmen found the room, they recovered three cartloads of bones.

In 1599, another deadly deed occurred at Leap Castle. Charles O'Carroll, the last chieftain at Leap, was at war with the Earl of Tyrone and hired the MacMahon clan, from Monaghan as mercenaries. After they had fought for him, O'Carroll held a feast for his mercenaries, and then had them murdered in their sleep. The MacMahon clan are said to haunt the great hall at Leap Castle.

Many strange incidents have been witnessed at Leap Castle, including apparitions, eerie lights and unexplained ghastly noises. One of the most widely reported was when one owner Mildred Darby, an amateur occultist held a seance at the castle. She found herself confronted by a ghostly inhuman figure and the smell of a decomposing corpse.

In the 1970s a new owner brought in a white witch to exorcise the castle. When she finally emerged she said the spirits were no longer malevolent, but will not leave the castle. 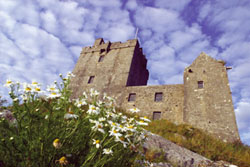 You'll find more detailed information on Ireland's castles throughout this website, with pages on Ireland's visitor castles.
Plus we have put together a number of suggested self drive itineraries visiting Ireland's top Castles:

If you would like more information about Ireland, our self drive tours of Ireland, escorted coach tours or activity vacations please contact one of our Ireland based Guides who can provide you with a free quote.