The town of Knock is famous throughout the world. Thousands of pilgrims flock there each year to the Shrine of Our Lady. On the 21st of August 1879, Our Lady, St. Joseph and St. John the Evangelist appeared at the south gable of Knock Parish Church. The apparition was witnessed by fifteen people, young and old. From this miraculous occurrence, Knock has grown to the status of an internationally recognised Marian Shrine.

In 1979 following the visit of Pope John Paul II, it was decided that for the area to become prosperous, an airport had to be built. In 1986 Knock International Airport opened its doors to the world. The airport has grown to become one of Ireland's busiest regional airports. 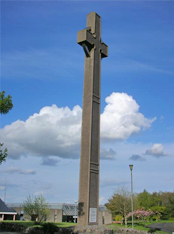 While staying in Knock, one can avail of the various attractions in the area. The Knock Folk Museum is located in the grounds of Knock Shrine. This museum enables visitors to experience the story of the Knock Apparition of 1879. The museum also however, demonstrates the lifestyles, traditions and customs of the local people at the time of the apparitions. The museum hosts a number of temporary exhibitions during the summer months.

As one would expect from such a popular destination, there is an abundance of accommodation in the area. Why not contact our travel consultants to find out more details.