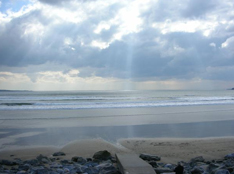 Situated on the shores of the Atlantic Ocean eight miles north of Spanish Point and three miles west of the market town of Ennistymon lies the busy seaside town of Lahinch. Popular as a resort with the Clare people in particular, Lahinch became popular as a resort originally due to the Old West Clare railway system which in years gone by transporetd people from Ennis to Lahinch during the summer holidays. Today whilst the railway system no longer runs, thousands of people continue to flock to Lahinch during the summer months.

Lahinch has been a popular tourist resort since the end of the last century. However it was inhabited long before this as there is evidence of prehistoric activity in the area. Numerous earthen forts are to be found in the area and of these the most important is on the northern side of the town on the road to Ennistymon. The Kilmacreehy Church dates back to the 12th century and the remains of Dough Castle can also be found in the area. This Castle was built by the O'Connor Clan in 1306 and it was occupied by the family until the O'Briens took it over sometime during the 15th century. The last recorded entry of the castle standing in full glory was in 1675 before it began to collapse during the 19th century.

Like all other towns in Clare, Lahinch has plenty to offer the visitor during a trip to Ireland. It has a beautiful sandy beach which stretches the length of the village and beyond provides some beautiful walks and idyllic conditions for fishing and swimming and in recent years has become a "surfers' paradise". The only safe area for swimming and surfing is by the Lifeguard Tower in front of the promenade.

With its magnificent 18 hole championship golf course Lahinch is very popular amongst Golf enthusiasts. Every year visitors flock to Lahinch Golf Club  to see some of the best golfers compete in the "South of Ireland Championship" on this beautiful yet extremely challenging golf course.

After exploring Lahinch during the day there is plenty of exploration to be done at night with some excellent pubs in the area providing really good music.