15 miles west of Dublin on the Grand Canal, is the town of Maynooth. The town's most famous landmark is St Patrick's College, part of the University of Ireland and also the national seminary for training of Roman Catholic Priests.

Called St. Patrick's College and Seminary, it is also known as Maynooth College. In existence since 1795, it is one of the few establishments of its type left in the country. It was 1910 when it doubled up as a national university, and is now a leading centre of third level education in the country. There is a small visitors centre where a video on the history of the college is shown and leaflets are available to find your way around the college for a self guided tour. 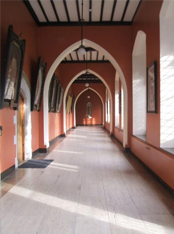 Also in teh town is teh ruined Maynooth Castle which was home to the Fitzgerald Clan until their defeat in the 1536 rebellion led by Silken Thomas. It was destroyed slowly by the British through the years, after the Fitzgeralds had been forced out. However, parts of the huge structure especially the keep, the great wall and the gate tower are preserved.

Water sports and especially canoeing are very popular around the area of Maynooth and indeed all along the river Liffey.

During the summer months, all types of accommodation are available. Getting to and from the Maynooth is not a problem with numerous daily bus connections to Dublin and other major centers around the country. Also, the town is on the main train route between Sligo and Dublin.