A popular town for Ireland vacations and frequently visited on a rail tours, Sligo is a typical Irish market town bustling with life, boasting a collection of traditional old pubs, a number of Neolithic sites nearby and is famed for its connections with the poet W.B. Yeats

In Gaelic the name for Sligo, Sligeach means, place of the shells, and Sligo is a busy fishing port and bustling market town, set at the mouth of Sligo Bay, flanked by the Mountains of Knocknarea and Benbulben made famous by the poet W.B. Yeats.

Like most of Ireland's coastal towns, Sligo was established as a settlement by the Vikings in the Middle Ages. The town's one remnant of medieval times is the ruins of the Dominican Friary, known as Sligo Abbey founded in 1252. Sligo is very much a working town, laid out around the attractive tree lined banks of the River Garavogue.

The town's cultural attractions; the Sligo County Museum, the Model Arts & Niland Gallery and Sligo Art Gallery are dominated by the Yeats family who were from the county. In the Gallery are works by Jack B Yeats, one of Ireland's foremost painters and the Museum houses an exhibition on his more famous brother W.B. Yeats, which includes the poet's Nobel Prize Medal. But the most extensive exhibition on one of Ireland's leading scribes is in the Yeats Building, which is the centre for the Yeats International Summer School. 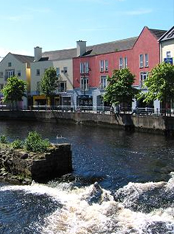 At night Sligo has a number of lively traditional bars some with live traditional music. One of the most characterful in the town is Hargadon Bros, with its dark interior, old wooden snugs and 19th Century bar fittings.
For live music the best bar is Furey's, owned by Irish traditional band Dervish, and an excellent cosy venue for a traditional session.

Within the attractive surrounding countryside of County Sligo are the extensive Neolithic burial sites at Knocknarea, Carrowmore and Carrowkeel, leading modern theorists to believe that Sligo could have been the cradle of Irish civilisation.