Even such unity as there had been under Brian had disappeared by the time Ireland faced its next challenge. This challenge came from the highly effective feudal monarchy that had been founded in England by William I (William the Conqueror) after his invasion of that country in 1066 from Normandy in 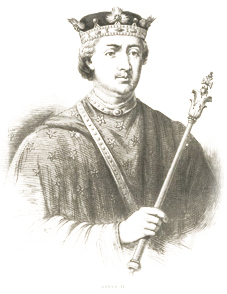 In 1171, William's descendant Henry II took advantage of an earlier letter from Pope Adrian IV authorizing Henry to make himself overlord of Ireland in order to bring the Irish church more into line with Roman standards. Several Anglo-Norman barons, with their retainers, had already seized large parts of Ireland when Henry went to Ireland with an army to receive the formal submission of those barons and of most of the Irish kings.

In those areas where the Anglo-Norman barons settled and drove out the native Gaelic aristocracy, they established a feudal system like that which their ancestors had brought from Normandy to England. The result, however, was not an effective centralized monarchy such as Norman feudalism had fostered in England. The English monarchy was usually distracted from Irish affairs by more pressing concerns such as the Hundred Years' War (1338-1453) and therefore did not effectively subordinate to royal authority even the Anglo-Norman colony. Thus, one may think of Ireland in the late Middle Ages as consisting of three concentric regions: (1) Dublin and its immediate hinterland (eventually called the Pale), the only area in which the English government really exercised authority; (2) a broad arc of territories beyond the Pale, which were the quasi-independent fiefs of the great Anglo-Norman lords; and (3) a further arc of territories along the western coast of Ireland that retained Gaelic customs and remained completely outside English rule.

The English colony in Ireland reached its greatest extent in the early 14th century, after which Gaelic society enjoyed considerable resurgence, partly by winning territories back from the colonists but mainly through the transformation of the Anglo-Normans into an "Anglo-Irish" aristocracy. As the Anglo-Normans intermarried with the Gaelic population and adopted the Gaelic language and customs, they gradually became "more Irish than the Irish." The Statutes of Kilkenny (1366) were an unsuccessful attempt to arrest this process and to define the area of English control. 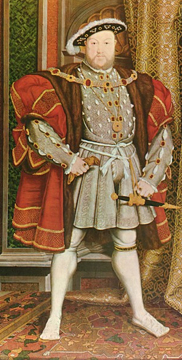 The Anglo-Norman conquest hastened reforms that brought the Irish church more into line with Roman standards. English legal practices and civil administration were introduced, and, although it served only the Anglo-Irish colony, an Irish parliament modelled on the English one was created in the late 13th century.

Because of the colony's propensity to support the Yorkist side in the Wars of the Roses (1455-85), England's King Henry VII forced an Irish parliament of 1494-95 to adopt Poynings's Law, which gave the English Privy Council veto power over any legislation that might be proposed in future Irish parliaments.

By the end of the Middle Ages it was clear that the Anglo-Norman conquest was a failure, and in the 16th century the English monarchs Henry VIII, Mary I, and Elizabeth I made concerted efforts to reconquer Ireland by military expeditions and by the establishment (or plantation) of colonies of English settlers in Ireland. Henry's severance of the ties between the Church of England and the papacy, during the Reformation, however, complicated the reconquest. In Ireland, unlike England, there was virtually no indigenous sympathy with the Protestant reformers among either the Gaelic Irish or the Anglo-Irish. Thus the Church of Ireland was legally transformed into a Protestant church rejected by the overwhelming majority of the population.