This town is the capital of the County of Tipperary . Originally an Anglo-Norman settlement, it is now at the centre of a fertile plain known as the Golden Vale. Rich and fruitful land makes its farmers the envy of their fellow-farmers throughout Ireland.

It was the scene of many violent incidents during the Plan of Campaign which was part of the second phase of the Land War in the 1880s. A statue of the Fenian leader of that time, Charles J. Kickham, can be seen on the main street. The Sean Treacy Swimming Pool, named after the War of Independence veteran, is also testament to the past history of this town.

South of Tipperary town are the Slievenamuck and Galtee Mountains which provide the perfect setting for hiking and sightseeing. 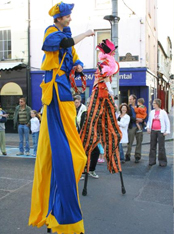 The county of Tipperary is an important equestrian area , with racecourses at Thurles, Clonmel and also Tipperary town. Regular race meetings take place at Tipperary Racecourse which is actually situated at Limerick Junction and was formerly known as "The Junction". There are also many racing stables and studs in the area. The world-famous Coolmore Stud is situated in Fethard with its satellite farms dotted around the Tipperary countryside. The great Istabraq is trained locally at Ballydoyle. Next to Kildare , one could suggest that the area is the bloodstock and racing centre of the country.

Good accommodation and easy travel to and from the town make Tipperary a good destination. Limerick Junction train station on the main train line between Cork and Dublin is 3 miles from the town.