Situated on the banks of the River Suir, Waterford City is the principal seaport and commercial hub of South East Ireland . Supporting a population of 42,000 (including 8000 students) and a further 30,000 within a 10-mile radius, Waterford is fast establishing itself as an ideal base for visitors seeking to explore the many historical and natural wonders of the south coast.

Originating as a Viking stronghold in the 9th century, Waterford has evolved to become one of Ireland's most colourful and enigmatic cities. Visitors can stroll at ease through the spacious streets and cobble-stoned alleyways, admiring the splendid Victorian and Georgian buildings one instant, ancient Norman walls and look out towers the next. The flamboyant quay-side docks, creaky old barges and sky-scraping cranes underline Waterford's traditional role as a prosperous gateway to Ireland's extensive river systems; the modern city centre buildings and industrial hinterland indicate a city galloping enthusiastically into the 21st century. 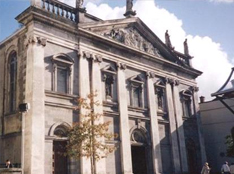 Waterford City offers plenty of rock-solid night-clubs, highly acclaimed theatres, cracking good pubs and finger-lickingly imaginative restaurants to keep everyone entertained. You can get there by road, train, bus or aeroplane. There are hotels and hostels and B&Bs galore.

A short drive brings you to the glorious coastal resorts of Tramore , Annestown, Bunmahon, Stradbally and Clonea. Walkers and horse-riders can trail through the wooded Comeragh and Knockmealdown mountains. Take your swing on a wealth of charismatic golf courses, pitched from the side of the sea to the summit of the hills. Marvel at the medieval towns and castles of Ardmore and Lismore . Fish and swim in the Blackwater and Suir river valleys. Surf and swim in the warm waters where the Atlantic Ocean and Irish Sea collide. Enjoy the fiddle and bodhran seisuns of the traditional pubs. Learn the trade secrets at Waterford Crystal's world famous factory, tune in to the Waterford Opera Festival , chance your arm at the Tramore Races ... all up, visitors can have a great old holiday in and around the City of Waterford.