A Brief History of Waterford City
Waterford City was founded by the Vikings in the late 9th century and evolved to become their most important stronghold in Ireland after Dublin . Following the Norman Invasion of Ireland in 1169, Waterford was one of the first city's to be conquered. Henry II of England formalised the conquest with a visit in 1171. His son, King John granted the town a charter in the late 12th century and set the ball rolling for the town's development as a major seaport and commercial outpost. Progress was considerably checked during the Henrician Reformation of the 16th century when the town's leading merchants and church bosses were thrown in prison or otherwise removed from power. The citizen's resisted Oliver Cromwell's advances in 1641 but ultimately surrendered to King Billy's massive Protestant force in 1691, ushering in a new age of industrial and architectural boom-time, best captured by the work of John Roberts and the Waterford Crystal Factory. 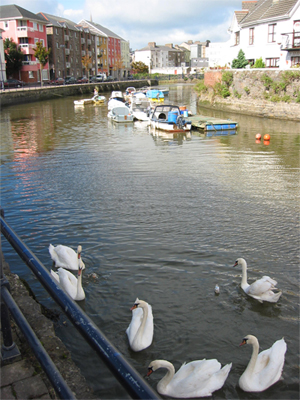 God-Fearing Vikings
It's generally accepted that Waterford was founded in 853AD as a wee safe-haven for the friends and family of a Danish fellow called Sitric the Viking. Vadrefjord (or "Ford of the Waters"), as Sitric skilfully called it, was a perfect location for enterprising Vikings to hang out. The River Suir on which it stands is a deep and navigable river with the nearby Barrow and Nore off-shoots powering north into the fertile agricultural lands of Wexford, Carlow, Tipperary and Kilkenny. It was thus very easy for the fearless blonde Viking giants to clamber on board their dragon-prowed long-ships and hightail it inland in pursuit of invaluable bounties and stray novice nuns from Medieval Ireland's famously wealthy monasteries and abbeys. Over the next 300 years, Vadrefjord developed to be the most important Viking stronghold in Ireland.

Now Sitric was one of those 9th century nutcase Vikings who believed in Thor and Valhalla and drinking neat brandy from axe-splintered skulls. His clan were also fans of the Airgead Sroine (Nose Money), a tribute which the subjugated Irish population of Vadrefjord were expected to pay; failure to pay said tribute meant having one's nose removed. However, somewhere along the way, Sitric's Viking descendants (known as "Ostmen") decided this sort of carry on simply wasn't acceptable.

One of these fellows was Reginald and, as Governor of Waterford, he built a wooden church (incidentally, on the site of the present Christ Church Cathedral) in about 1050 AD. He may or may not be the same Reginald who erected the rather magnificent 73 foot high circular tower at the east end of Waterford's Quay in 1003 (known ever since as "Reginald's Tower"). And he may or may not be the same Reginald who, otherwise known as Ragnall, was King of the Isle of Man and father-in-law to John de Courcy, the great Norman adventurer and first Earl of Ulster. (I won't get into it now but it's important to understand that all these Vikings, Normans, Manx and Gaelic chieftains were in cahoots with one another from the word go).

Oh! Lah! Lah! The Papal Go Ahead
At any rate, despite innumerable assaults by local Irish chieftains, the Viking settlement of "Vadrefjord" was still going great guns in August 1170 when a bunch of French-speaking land-hungry bandits drifted across the sea from Wales and up the Bannow Estuary, looking for a fight. The axe-wielding Vikings didn't fare too well against the highly-skilled and fanatically organised Norman crusaders, cavalry and archers (who, on form, could apparently loose off upwards of 50 flaming arrows a minute). Soon the town fell. The Viking chieftain of Waterford was escorted to Reginald's Tower, laid his head on the block and was brutally despatched. The remaining Ostmen were slung in prison or ran away to the hills and the seas and Iceland and Canada. Waterford was declared a Norman city. Indeed, until Viking Dublin was conquered a year later, Waterford was the most important city in Norman Ireland.

A middle-aged rogue named Richard de Clare, Earl of Pembroke, (better known as Strongbow) was the main man in the Anglo-Norman community of Ireland at this time. His sidekicks included a moody Welsh chap called Robert Fitzstephens and the rampantly xenophobic Giraldus Cambrensis, from whom the Fitzgerald family are descended. The beleaguered King of Leinster, Dermot MacMurrough, had selected Strongbow as a personal confidante and, in 1168, promised him vast estates if he crossed the Irish Sea and wiped out Dermot's enemies. Now the Welsh-Normans were here and they wanted their reward. Strongbow scooped the added bonus of Dermot's daughter and heiress, Aoife MacMurrough, who he wed in Reginald's Tower. The party apparently lasted three weeks; others tend to think the hoolie went on for round about 800 years. At any rate, this was the first in a long and intriguing line of weddings between a Norman knight and an Irish chieftain.

Meanwhile, back in England, bold and brash King Henry II was increasingly unhappy about the new power of these Anglo-Norman knights living it large in Waterford. A rival Anglo-Norman kingdom in Ireland was the last thing he and his supporters needed if they were to have any joy in consolidating the Norman Conquest of Britain, commenced a century earlier by the great William the Conqueror. Hence, Henry tugged his bushy beard and decided, sod it, I'll head over myself and see what all the fuss is about. He set off, armed with a fleet of 400 ships. This trip to Ireland in 1171 was a whopping success. All the Normans and heaps of Irish chieftains swore allegiance to him. Those that didn't play ball - such as Fitzstephens - were bopped over the back of the head and escorted off to Reginald's Tower in shackles. But for the most part everyone agreed that Harry was a great man and it would be an honour to serve him. For his part, Harry granted the Normans a charter of protection, suggested everyone work hard on making Waterford somewhere to write home about, and cantered north to see how the crack was in Dublin. The Normans of Waterford said "fair enough" and proceeded to wall and fortify their new HQ.