The Irish are known throughout the world for their love of music and they celebrate it, with craic agus ceol - music and good times. This is best seen in Ireland during summertime, when traditional Irish festivals and events are held all over the country. 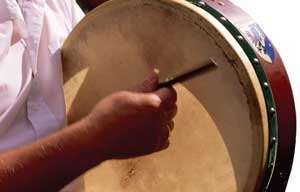 Ceilis, feiles and fleadh's have been celebrated throughout Ireland for centuries, with song, dance and storytelling in the old Irish traditions. Music would be provided by the Irish Harps, fiddles, uillean pipes, the bodhran player, the accordion and the penny flute, would play out centuries old songs. They'd play jigs, reels and polkas, for traditional set dancers to lift their sprightly legs to, while Sean Nos singers would sing solo ballads and storytellers would recite age old Irish folklore, as small crowds gathered to hear. This essential part of Irish culture can still be heard and seen today, from impromptu traditional seisuns in pubs, to sell out concerts and at numerous festivals across Ireland.

Two of the oldest traditional festivals in Ireland are the Oul Lammas Fair in Co. Antrim and Puck Fair in Co. Kerry. On the last weekend in August the town of Ballycastle on the Antrim Coast, plays host to the Oul Lammas Fair, a festival which sees the town taken over by a traditional horse and cattle market, while at night the town is filled with the sounds of the Bodhran and fiddle.

Puck Fair is renowned in Ireland and along with being one of the oldest fair's it is perhaps one of Ireland's quirkiest. For three days the town of Kilorglin in Co. Kerry, is ruled by King Puck, a goat, crowned and hoisted onto a stage in the centre of the town, while the town's people enjoy three days of revelry and music of all kinds Puck Fair - Kilorglin

Throughout the summer just about every town or county of Ireland holds a Feiles or Fleadh. If you are here on vacation in Ireland during this time, then you'll find the Feile Lughnasa in Co. Kerry, the Feile Iorras in Co. Mayo, the Feile an Earagail in Co. Donegal the Ragus on the Aran Islands, the Siamsa Seisun in Galway and many more. All of which keep alive Irish traditional music and dance in their own unique way.

One of the biggest festivals of traditional Irish music and Celtic culture is the Beo in August, at the National Concert Hall in Dublin. Though this isn't perhaps the most organic festival and has been running for only 7 years, it is fast becoming one of the largest festivals of traditional music in Ireland, attracting many famous names in Irish Trad, as well as the latest talent in world music from all over the globe.

Across the country there are a huge number of less formal festivals of Irish Trad music, attracting a dedicated local crowd of musicians young and old. The most famous of these is the Feakle International Traditional Music Festival in one of the counties best known for its traditional Irish music, Co. Clare. The Feakle festival involves workshops and tutoring schools as well as concerts by some of the most gifted musicians in Ireland.

Details on all these festivals can be found on our events page. Or contact one of our vacation specialists for booking information.