Ireland's second largest city, Cork (Corcaigh in Irish) is a 'county borough' in Ireland and the capital of County Cork. It is located at the mouth of the River Lee at the head of Cork harbour. The word Corcaigh actually means marshland and the city was built in a marshy valley area where the Lee splits into two channels to form an island that is the heart of the city.

Tradition holds that the city was founded in the late 6th or early 7th century by St. Finbarr, who went there to kill the last dragon in Ireland and who built a monastery on the current south side of the city. Cork was taken by Henry II in 1172 and by Oliver Cromwell in 1649. The city is often called "Rebel Cork" because it was a centre of the 19th-century Fenian movement and played an active part in the Irish struggle for independence. In 1920 the centre of Cork was completely destroyed by the notorious Black and Tans during the War of Independence . The Mayor of Cork, Thomas MacCurtain, was killed by them in the same year. His successor, Terence MacSweeney, died in London's Brixton Prison after 75 days on hunger strike. 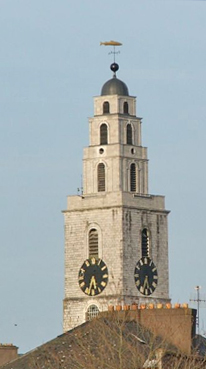 A famous landmark is the Shandon Steeple of St. Ann's Church, which contains the Bells of Shandon. Cork is the seat of University College (founded 1845; part of the National University of Ireland since 1908). The Cork Film Festival is held each summer and it hosts the famous Cork Jazz Festival each October Bank Holiday weekend . The world famous Blarney Castle is just five miles north of the city.

Cork is a city that is proud iof it's sports endeavour. In 1990, Cork was the first team of the twentieth century to capture an All-Ireland Championship in both Hurling and Gaelic Football in the same year. This had only ever been achieved twice before with Cork also achieving the feat 100 years previously in 1890 with Tipperary following in 1895. This is the city that named a bridge after a hurler (Christy Ring Bridge). The city is full of clubs that are great rivals, Nemo Rangers, St Finbarrs ("The Barrs"), Glen Rovers ("The Glen"), Na Piarsaigh just to name a few. If you are in Cork during ' The County Championship ' and any of these teams are involved, be sure to attend a match. The thrills and excitement should not be missed.
Soccer fans primarily support the local club Cork City, but many also support an English club, as that is the closest fully professional soccer league.

There are a number of places worth visiting while in Cork. Start with the imposing St. Finbarr's Cathedral which was built by the renowned Victorian architect William Burges. Across the river is St Anne's Church, Shandon. This church houses the Shandon Bells and the tower has two sides faced with limestone and two faced with sandstone. Cork City Goal has a fascinating 35-minute taped tour and also houses the National Radio Museum where you learn about Marconi's conquest of the airwaves.

If you are interested in exploring the shops of Cork, you will also get a sense of the traditions of the city. Patrick Street and Grand Parade make up the commercial heart of Cork. Modern chain stores stand alongside the more modest businesses which have lined these streets for decades. Be warned though that parking is increasingly difficult to find in the centre of the city, especially on Saturdays and so you may be advised to make use of the efficient public transport system. One hundred yards from Patrick Street you will find the Coal Quay Market. This is an ideal place where you will be able to peruse local crafts and organic produce. If you are curious about the history of trade in the city, a visit to the Cork Public Museum in Fitzgerald Park is a must. Charting the history of Republicanism primarily, the museum has side exhibits on trade and the guilds in Cork as well as information on silver and glassware in the area. 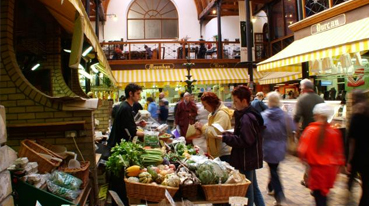 Cork's cultural rivalry with Dublin extends to stout. Murphys and Beamish are two local stouts that are brewed here. Murphys is not as bitter as Guinness and Beamish has stronger "roast" flavour.

Cork City is full of pubs and traditional music can be heard in a number of them. While in the centre of Cork, you should maybe try An Spailpín Fánach in South Main Street or An Bodhrán in Oliver Plunkett Street. The Long Valley in Winthrop Street is viewed as simply "a Cork institution". Cork is also well supplied with fine restaurants and interesting cafes and bistros.


Cork Airport , the international gateway to Cork City is easily accessible with connections from most European Hubs